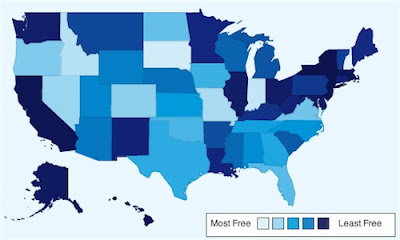 The Mercatus Institute, a libertarian think tank, has drawn a lot of mockery online by releasing a study that says New York and California are the least free parts of America, while South Dakota and New Hampshire are the most free. If your idea of freedom is all about being left alone while you sit by yourself on your farm, sure. But if you care about being able to do things, from starting a new business to trying a new restaurant, there is a lot more freedom in New York or Los Angeles.

Now, via Matt Yglesias, some clever people have compared this measure of freedom to other measures of the quality of life:

We shouldn't get carried away with the causality here; the main cause of this relationship is that rich people in crowded areas demand more regulation than poor people in remote areas. But the fact remains that activist government correlates very well with most of the things that make up the good life. Nor is this a new development. It has been true throughout recorded history that the richest places, especially the most dynamic cities, have had activist governments enforcing numerous regulations. Therefore it cannot be true that regulation and taxation generally stifle growth, and it seems very likely that, at least when administered by reasonably competent, un-corrupt governments, they actually promote growth.
Posted by John at 2:05 PM