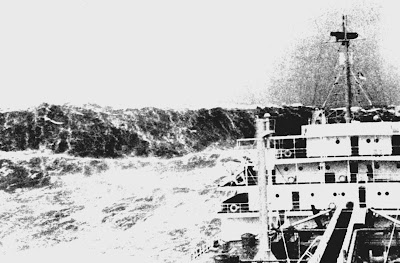 I sort of thought that the advent of giant supertankers and supercargo ships meant that sailors no longer had to fear sinking at sea. It seems not:

Severe weather has sunk more than 200 supertankers and container ships more than 200 yards long in the past two decades, an ESA [European Space Agency] analysis found. . . .

"Two large ships sink every week on average, but the cause is never studied to the same detail as an air crash," said Wolfgang Rosenthal, a senior scientist with the GKSS Forschungszentrum research center in Germany. "It simply gets put down to 'bad weather.'"

The ESA launched two radar-equipped satellites to study giant waves, to see if they were the culprit. They found that large waves are not rare:

The two ERS satellites equipped with radar were launched in 1991 and 1995 to carry out a global rogue wave census and arrive at the truth. . . . The radar instruments on the satellites detected the height of individual waves at the surface in 3-mile by 6-mile patches of the sea. Three weeks of data, including 30,000 of these patches or "imagettes" of the sea with their wave height information were analyzed and searched for extreme waves at the German Aerospace Center.

A scientific team counted more than ten individual giant waves around the globe more than 75 feet (23 m) high during the three-week period. . . .

The giant waves form when strong winds beat against an opposing ocean current, when waves from different storms join forces, or when swells interact in strange ways with a particular seafloor.

It is always fascinating when stories of questionable provenance turn out to be true, especially when they involve big, scary things.
Posted by John at 6:28 PM

"200 supertankers sunk by freak waves in 20 years" is a myth. The real number is zero. The European Space Agency made this number up back in 2004. It's been rattling round the web ever since.