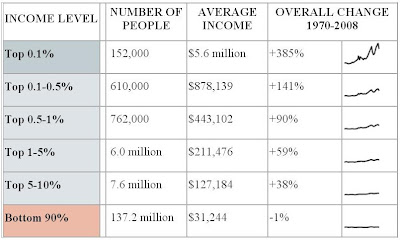 This table from the Washington Post puts in simple form what has happened to the US economy over the past 40 years. The very rich have gotten much richer, the rich have gotten richer, and everybody else has been treading water.

I think this is bad for several reasons. It undermines democracy by attacking the sense that all Americans are in the same boat. It undercuts the desire of poor and middle class people to "work hard and play by the rules," since they can see that the game is rigged against them. It feeds anger and cynicism. It decreases the likelihood that the elite will care or even know what is happening in most of the country -- like now, when our political leaders are focused on deficit reduction and tax cuts at a time of 9% unemployment. Plus it just isn't fair. There is no sense in which a CEO is worth a hundred times as much as a machinist, and don't try to tell me that executive salaries are set in the "free market," because they are not. If any American company would have trouble hiring a smart executive for a mere million a year, I'm a Tibetan monk. Those salaries are set by board members who either are or want to be members of the same rich elite, according to their own standards of what is reasonable; the very existence of those bizarre standards shows that our social fabric is being undermined by inequality.

What we can do about this is another question. I hate the thought of trying to legislate limits on executive pay, which would probably be an ineffective boondoggle. The only strategy that makes sense in the short term is higher taxes on the rich, coupled with spending to spread the wealth via better health care, better education, better public transportation, and so on. In the long term we should resist the notion that money is everything, stop worshiping people just because they are rich, and try to shift the culture away from the sense that money is all that really matters.
Posted by John at 7:32 AM