More on Drug Lords with Submarines 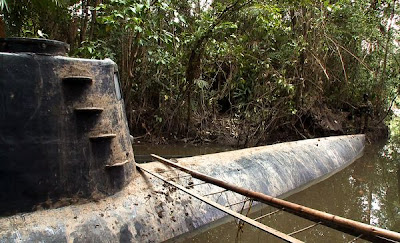 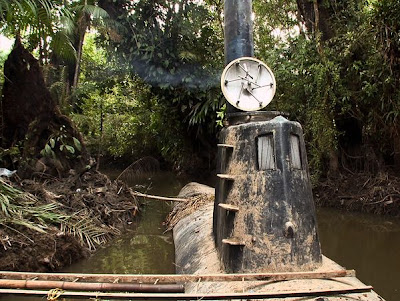 The saga of Colombian drug lords with their own supervillainesque submarines (see here and here) continues. These latest models are fully submersible and carry more powerful engines:

A recently discovered drug-smuggling submarine lies half submerged, deep in a mangrove swamp in Colombia. The diesel vehicle is the first fully submersible drug sub ever to be captured by U.S. Drug Enforcement Administration (DEA) in the South American country.

The hundred-foot-long (30-meter-long) fiberglass sub can carry a crew of six underwater for more than a week, dive some 30 feet (9 meters) below the surface, and ferry about eight tons of drugs worth an estimated quarter of a billion U.S. dollars. 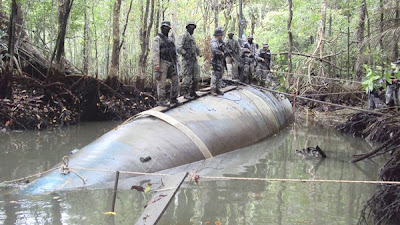 Note that while this may be the first fully submersible sub captured by the US DEA, at least one other (above) has been found by the Ecuadoran police:

Police in Ecuador seized a 100-foot submarine being built by suspected drug traffickers capable of carrying a crew of six and 10 tons of cocaine on underwater voyages lasting up to 10 days — a "game changer" for U.S. anti-drug and border security efforts, officials said Monday.

A raid Friday by 120 police officers and soldiers netted the fiberglass sub as it was nearing completion in a clandestine "industrial complex" hidden in mangrove swamps near San Lorenzo, a town just south of the Colombian border.

The craft was outfitted with a conning tower, a periscope, air conditioning and "scrubbers" to purify the air, and bunks for a maximum crew of six. But what set the craft apart from semi-submersible craft that drug traffickers have used for years was a complex ballast system that would have enabled it to dive as deep as 65 feet before surfacing. . . . The cost of the ship, which had twin diesel engines, was estimated at $4 million.

A "clandestine industrial complex" hidden in a mangrove swamp, building outlaw submarines; you can't get any more Johnny Quest than that.

The drug barons have moved on to fully submersible craft because the US has gotten better at catching the older, semi-submersible type:

Since 2006, when the first semi-submersible craft was detected, 47 have been captured at sea and on land, including 17 last year. But so far this year, only three such craft have been captured. The number of voyages has probably dropped, officials said, because of the success in detecting the vessels with a variety of methods, including aircraft that can identify their wakes in the water.

Or maybe the DEA just can't detect the new subs.
Posted by John at 12:55 PM