Another Mystery in the Oella Woods: the Standing Stones 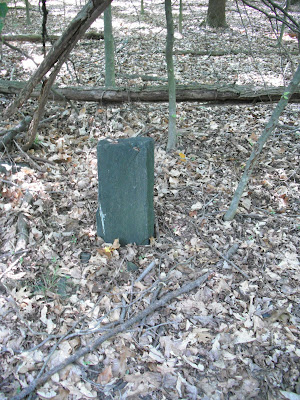 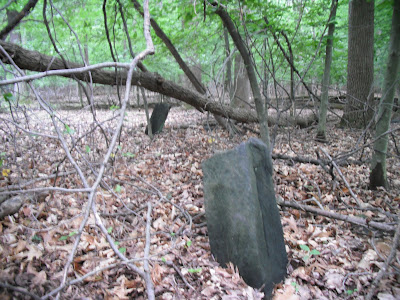 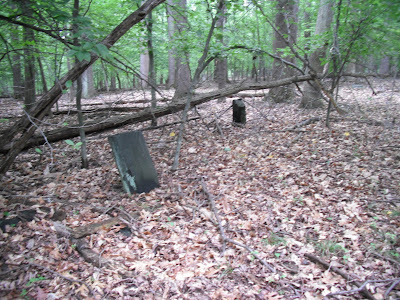 The most interesting thing I have so far found in the woods is these stones. An uprooted tree might pull one stone upright like this, but hardly two so close together. So people must have done this. They look like gravestones.

The small family graveyards that are such a feature of the Southern landscape are a New World innovation. In Europe, people were buried in churchyards, in consecrated ground. But in Virginia, almost as soon as settlement spread off the island if Jamestown, people began to bury their dead in small plots on their own plantations. Only the rich could afford well-carved stones. Poor people made do with wood, or with convenient pieces of natural stone like these. 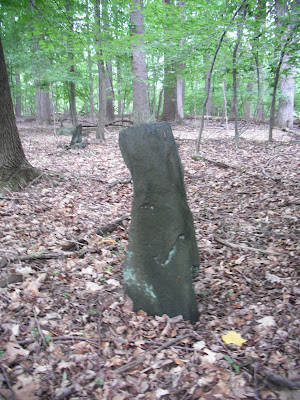 So as soon as I found these stones, I wondered if they were grave markers, but not until last week did I explore carefully. Looking around, I found a third stone about 35 yards (30 m) away. 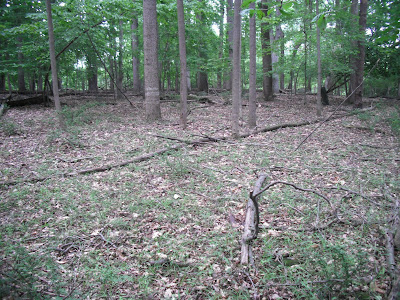 The area in between is an open glade where stiltgrass and bayberry grow; these are invasive plants that colonize disturbed soil, often around old house sites and the like. Usually on a family cemetery like this there are visible depressions marking at least some of the graves. This glade is hillocky and uneven and there are a couple of depressions that might be graves, but really this whole ridge is like that. And if this whole glade is a graveyard, it is big enough for a couple of dozen graves; where is the farm or house where these people lived? It might conceivably have been a good distance away, which happened sometimes, but usually the graveyard was within a hundred yards of the house. 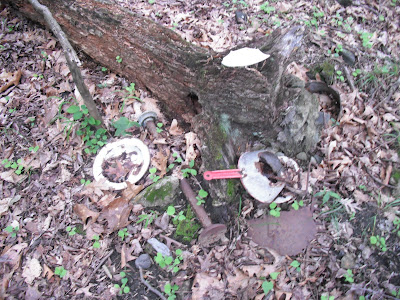 So I went looking for a house. I never found one, but I did find some signs of habitation. These artifacts date to the twentieth century. They might be from a small house that hasn't left visible foundations, but then again they could be from a camp or just trash dumping. A house big and long-lasting enough to leave a sizable graveyard ought to be a lot more obvious than this.

So I still don't know quite what to make of my three standing stones, and it would probably take a fair amount of digging to find out for sure if they are gravestones, and if there are any other unmarked graves in between them.
Posted by John at 7:57 PM

I have encountered a number of these standing stones while traveling the New England woods.
Daniel Gookin mentions the use of a stone as a marker by native Americans. Gookin witnessed an indian stop at one such marker leave an object and then proceed on his way.