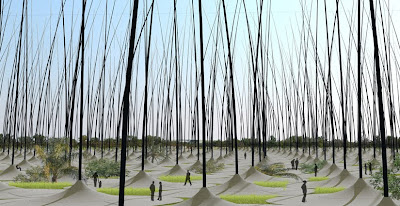 Here's an interesting idea: wind power without rotors. The people who designed this system seem to be architects rather than power engineers, but Windstalk is certainly a concept worth looking into:

The proposed design calls for 1,203 “stalks,” each 180-feet high with concrete bases that are between about 33- and 66-feet wide. The carbon-fiber stalks, reinforced with resin, are about a foot wide at the base tapering to about 2 inches at the top. Each stalk will contain alternating layers of electrodes and ceramic discs made from piezoelectric material, which generates a current when put under pressure. In the case of the stalks, the discs will compress as they sway in the wind, creating a charge.

“The idea came from trying to find kinetic models in nature that could be tapped to produce energy,” explained Atelier DNA founding partner Darío Núñez-Ameni. 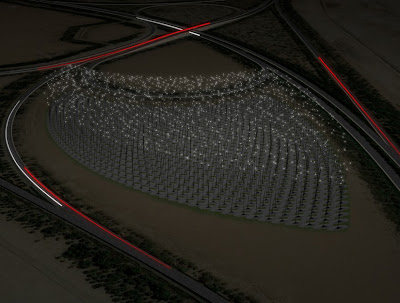 In the proposal for Masdar, the Windstalk wind farm spans 280,000 square feet. Based on rough estimates, said Núñez-Ameni the output would be comparable to that of a conventional wind farm covering the same area.

“Our system is very efficient in that there is no friction loss associated with more mechanical systems such as conventional wind turbines,” he said.

In terms of cost, I doubt a piezoelectric system could be made competitive, since the materials are expensive and wear out over time. But the materials are improving rapidly, so in twenty years, who knows? In the mean time I can see demonstration systems being installed in urban areas, as productive art.
Posted by John at 10:20 PM