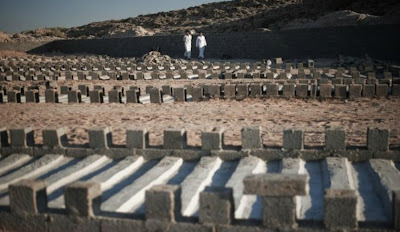 In order to prevent Moammar Gaddafi from regaining control of his rebellious country and massacring thousands of his subjects, NATO went to war. Bombing quickly halted the advance of Gaddafi's columns toward Benghazi, but Gaddafi refused to follow the script laid out in Paris and London and holds onto power in half of the country. Over the past three months NATO has flown 4,700 sorties over Libya, and drones are in place to watch government troop movements. Still, the war goes on, and people die in it every day. I feel quite confident that by the end more people will have died in the war than Gaddafi would have killed in resuming power.

We seem to feel, though, that deaths in war are less awful than other sorts of casualties. More Americans died in the Iraq war than on 9/11, yet only a few cranky leftists seem to think that the war was worse than the terrorist attack. Why do we think this way?

When it comes to American soldiers, there are ways to make the distinction. Our soldiers and marines are volunteers, well-trained for their roles and willing to take on the risk. But around a hundred thousand Iraqi civilians died in the war; does that make us 30 times worse than al Qaeda? Civilian casualties probably outnumber slain fighters in Libya as well; why don't those bodies count as much as victims of terrorist attacks or genocide?

War is hell, and people who die from "collateral damage" are just as dead as people executed by firing squads or killed by suicide bombers. Leaders who sit safely at home in Paris, London or Washington should think as much about the people dying in their wars as the people they are fighting to protect.
Posted by John at 7:34 AM