Mystery Walls in the Oella Woods 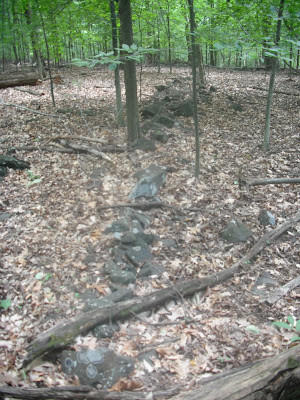 I was walking with Coraline in the state park last week when I decided to head off the trail and explore the edge of the bluff over the Patapsco River. The ground here is very rocky, but amidst the general scatter of stone I thought I could make out some segments of wall. And then I found this, which is absolutely an artifact of human labor. It is not tall enough to have served as a fence, so it appears to be a foundation of some kind. (Sorry about the quality of the pictures, but it's darker in these woods than my little digital camera can handle.) 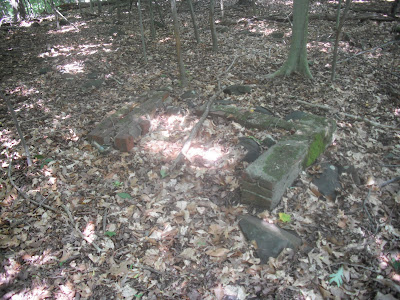 Nearby was this even more obvious human construction. The Portland mortar and hard, regular brick dates this hearth to the 20th century. Nearby was what looked like a rectangular foundation that I paced out to be about 12 by 25 feet (3.6x7.5 m). 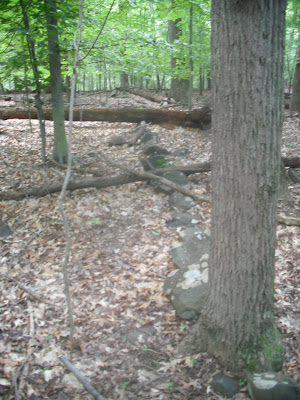 About fifty yards (45 m) farther along the bluff was an even more extensive collection of walls, some forming rectangular enclosures but others running at odd angles. 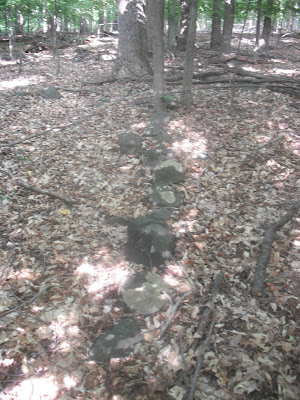 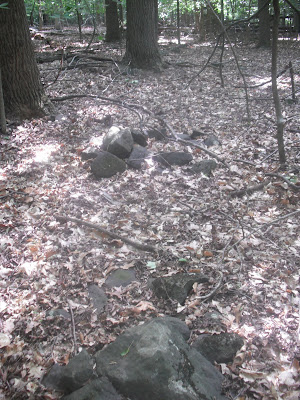 This looks for all the world like a building about the same size as the first, with a stone hearth along one wall. It may actually be a double structure, with a second chamber attached to one end. 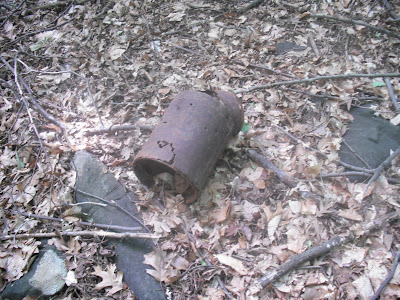 But what is it? This was the only artifact I saw, a metal can of some kind. Based on the growth of trees, the buildings were abandoned at least 50 years ago, so they date to between 1900 and 1960. I don't think this can represent a farm, since there isn't any plowable soil nearby. The first thing that came to my mind was some sort of campground, possibly from the early days of the state park, or possibly a private hunting camp from the early 1900s. Another possibility would be a steam-driven sawmill; these operations were moved around the country to wherever there were mature trees to cut and mill, and this forest certainly seems to have been logged some time in the right period.

It's an intriguing little mystery, and a reminder that things don't have to be ancient to be overgrown and forgotten.
Posted by John at 3:06 PM

Probably the foundation of an old mill for there were over 150 of them lining the Patapsco river valley. By the mid-twentieth century all but a few were gone. There is a late nineteenth century photo of the old mills lining the river looking up river from what is now the Frederick road bridge. I can't remember where I saw it and a quick Google search came up empty. I want to say its in the Catonsville Historical Society but then again I might have seen it hanging on the wall at the Trolley Stop. You can still find traces of the old mill race. It begins up behind the new houses at the end of Westside Blvd and continues straight down past the current Oella Mill.