The Broken Idols of Keros 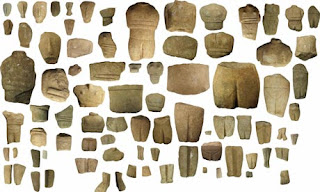 The Bronze Age sculptures we call Cycladic Figurines are found in all sorts of sites across the Aegean: in domestic trash middens, in temples, in graves. They are also found on the essentially uninhabited and uninhabitable island of Keros. Back in 1963, the now eminent archaeologist Colin Renfrew was a graduate student. He carried out a solo exploration of the island, finding hundreds of pieces of broken idols. No whole figurines, just pieces. Now, after more excavations recovered hundreds more pieces, and an extensive search failed to find any pieces that can be fitted back together, Renfrew has a theory about how the fragments got to this inhospitable place:

It appears Keros was the ceremonial destination for a ritual that involved islanders breaking prized possessions and making a pilgrimage with fragments for burial.

"It is rather remarkable," said Professor Colin Renfrew, who led the most recent excavations. "We believe that the breaking of statues and other goods was a ritual and that Keros was chosen as a sanctuary to preserve the effects."

In 2006 Renfrew found an unlooted site of buried broken figurines and the remains of a settlement on an islet about 100 metres away, Dhaskalio. There the team found evidence of a kind of bronze age guesthouse where visiting villagers would have congregated on their pilgrimage. Geological examinations showed it was built from imported marble rather than the flaky local limestone. . . .

Renfrew's theory is that Cycladic villagers would have used the figurines and bowls in a ritualistic way, perhaps carrying them in processions as icons are carried in Greek villages today.

"After they had been used for some time, perhaps decades, the time would come that it would go out of use," he said. So they were broken and fragments taken to "one remarkable ritual centre". Renfrew said it was likely that the islanders would go to Keros at regular intervals, in much the same way that the ancient Greeks held the Olympics every four years.