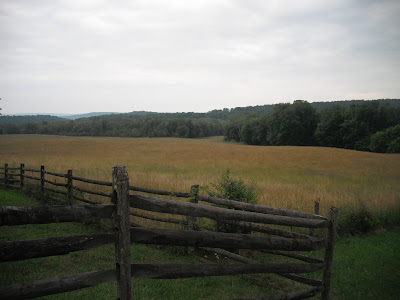 Today I drove 2 1/2 hours out to western Maryland to speak at the Oldtown Summerfest, a true old-time-small-town-heart-of-America event. I was there to speak about some archaeology I did in the area over the past few years, working in the C&O Canal National Park. This is a view of the field where some of my sites were located, just about a hundred yards (90 m) away from the tent in the center of town where I gave my talk. 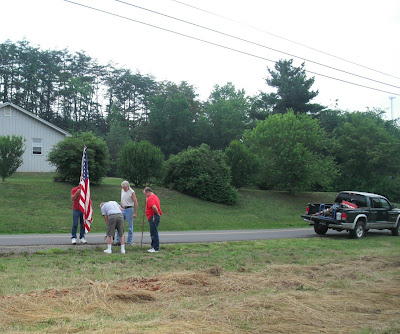 The festivities kicked off with a parade too small even to have a marching band or Shriners on go-karts. More than anything else it was celebration of patriotism. A woman in a red STAFF t-shirt worked through the whole crowd with a big bunch of little plastic American flags, saying, "If you're going to watch the parade, you need a flag to wave." The street was lined with bigger flags, set up by these guys earlier in the morning. 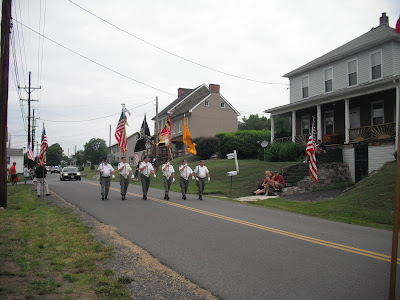 The parade was led and punctuated by groups of marching ex-soldiers -- there seem to be lots of ex-soldiers in Allegany County, and, I assume, lots of young men away in the service. 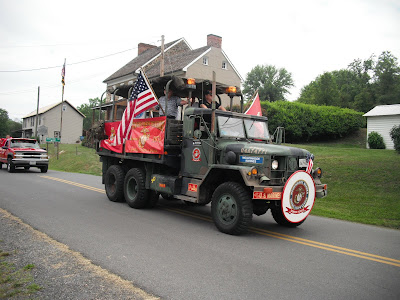 Other soldiers rode in vehicles, including a couple of skeletal World War II veterans and these jovial "Mountainside Marines." 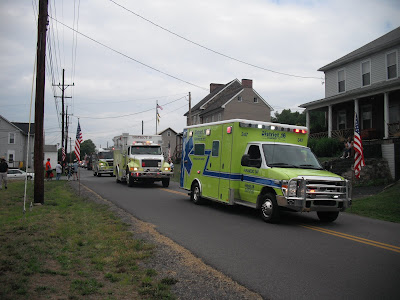 There were some politicians in big pick-up trucks and a full suite of emergency vehicles, lights flashing, occasionally sounding their horns or sirens. 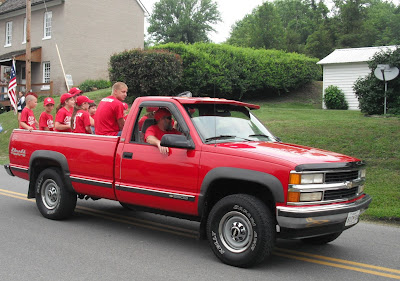 The local co-ed little league team rode by in a truck that matches their uniforms. They are the Indians, of course -- Oldtown is a shortened form of "The Old Indian Town" -- and I thought that kid with the bright red mohawk deserved the day's award for spirit. 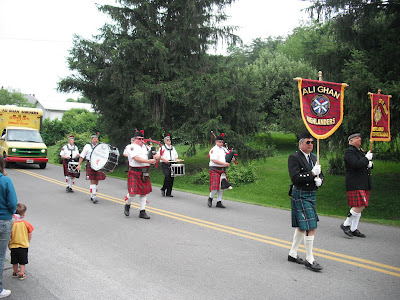 The only live music came from these Scottish gentlemen. 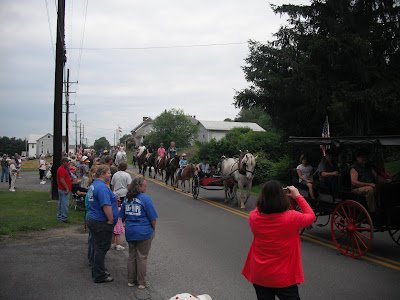 There were some horse-drawn carts. 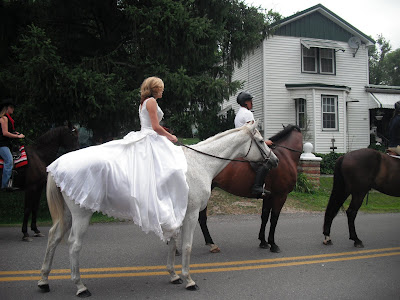 And a troop of girls from a riding school, this one done up as if she were the Summerfest Princess. 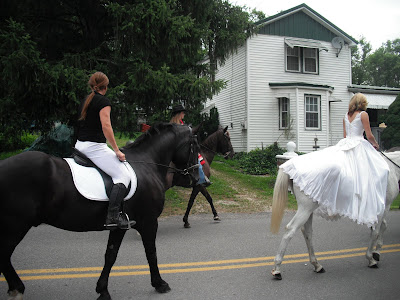 Right behind the white-clad Princess came the attractive, 4o-something riding instructor, with her black boots and black horse, barking orders at the younger kids, and my mind suddenly leaped into Snow White -- "Has she replaced me as the fairest in the land? We'll see about that, my pretties!"

And that was it. 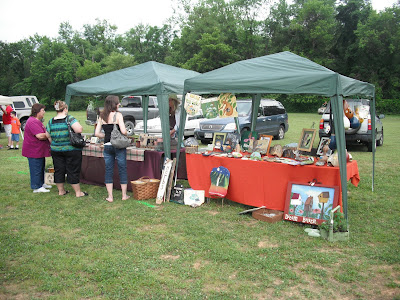 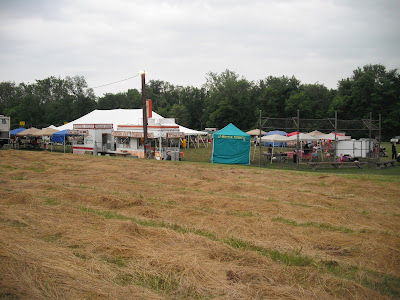 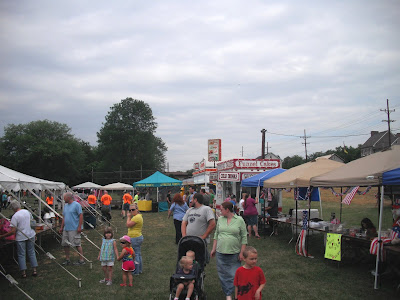 After the parade the action shifted over to this little cluster of tents, where there was food and some local crafts. I spoke in that big tent in the center, but not until after a girl of about 17 sang the Star Spangled Banner. She had a nice country voice but messed up the words and skipped two lines. About sixty people listened to my talk. Many of them were in town for the reunion of the descendants of Thomas Cresap, and since one of the sites we found was Thomas Cresap's frontier fort, which he built in about 1742, they were an appreciative audience. I had Lions Club grilled chicken for lunch. Everyone was very friendly, the weather was cool and lovely if a bit gray, and although it was a long way to drive it was a pretty fun way to spend a Saturday.
Posted by John at 7:22 PM

Wow...First of all, the parade was wonderful! We may be a small town, but we take pride in it and in everything we do. I found that your "creative writing" blog was quite offensive and not at all correct! Your first msitake was calling our soldiers "ex-soldiers". There is no such thing. A soldier that has served our country considers himself a soldier until he passes on. And even then, he is remembered as a great soldier who served our country well! Furthermore,how young do you think our WWII veterans should look? Calling them "skeletal veterans" was also an insult! The horses in the parade was not a "riding school" but local people in our communtiy who own their horse and was competing for "the best in show" memorial plaque. This is the first year this was given, in memory of a beautiful young lady in our communtiy, Cheyenne Haines. Cheyenne passed away 14 months ago with leukemia. Her memory and her love of horses will live on... Also, your slam about the 17 year old girl messing up the Star Spangled Banner was also out of line. Even professional singers have messed up time and time again on this anthem. There was a lot of hard work and many hours put in to this event! I myself appreciate the time that these people, who volunteer their time, have put in to keep this event going every year! Call us Mayberry...It would be a compliment! Just don't make fun of the hard work that people did, or our veterans, or anyone in our communtiy. This is one community that won't put up with it! So save your gas next time, stay 2 1/2 hours away from Oldtown.