Artists with Manifestos: the Vorticists 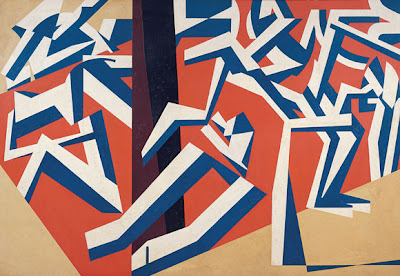 No words call forth the spirit of the modernist age better than these: "they issued a manifesto." From the French Revolution to 1968, the world was crawling with radicals, reformists, and revolutionaries of every stripe. Each had a cause, a mission, a sacred duty, and a program, and each had a manifesto to lay it all out for the world. Art followed politics, and from the Romantics to the Impressionists to the Cubists to the Expressionists to the Abstract Expressionists, artists formed clubs and movements and issued manifestos laying out what was wrong with all the other art in human history and how their revolutionary movement would change all this for the better.

Britain's Tate Gallery is mounting an exhibit that remembers one of the nearly forgotten revolutionary movements in the art scene, the Vorticists:

A century ago, rebellious young artists across Europe banded together in a succession of loudly publicised avant-garde movements. After Expressionism had erupted in Germany, Cubism revolutionised painting in France. Then the Futurists came out of Italy, demanding that art should celebrate the blurred excitement of machine-age dynamism. Rival groups issued manifestos, proclaiming their ability to transform everyone’s vision of the modern era. The years leading up to the first world war were alive with the energy of all these conflicting “-isms,” and in the summer of 1914 a new British movement was announced by a belligerent magazine called BLAST.

This publication marked the arrival of Vorticism, and it burst on the world with the impact of a bomb. The thick, black capitals peppering its pages had the force of a loudhailer. The images reproduced in BLAST proved that British art was being revolutionised by a fresh, London-based generation of painters and sculptors dedicated to extreme, urgent renewal. They wanted to sweep away the inhibiting legacy of the “VICTORIAN VAMPIRE,” and now the summer exhibition at Tate Britain intends to celebrate the landmark importance of the Vorticists’ achievement.

It is hard for us in the post-revolutionary age to take all this sound and fury seriously, but you can get a sense of the energy behind these fulminations in works like David Bomberg's The Mud Bath (above). Somehow the destruction of art's old ways and the crafting of these striking images was going to unshackle us from the past and help sweep away the monstrous construction of social, political, and economic conformity that held humanity back from its potential. 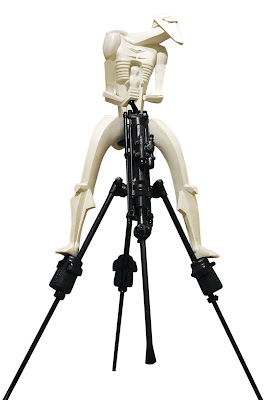 The optimism of the Vorticists took a beating in World War I, and their embrace of progress and the machine age came to seem hollow. I was fascinated by the story of this sculpture, Rock Drill by Jacob Epstein. First, it looks so much like a battle droid that I have to think Epstein (who made many of these robotic figures) had a big influence on the design shop at Lucasfilm. But the work did not long endure in this menacing and phallic but rather rational and somehow productive form:

Soon after this titanic sculpture was exhibited in 1915, Epstein discarded the drill, lopped off the driller’s legs and dispensed with his right forearm. In this way, the once-superhuman robot was turned into a tragic victim called Torso in Metal From the Rock Drill, a man now incapable of defending either himself or the embryonic child lodged so surprisingly within his exposed ribcage.

The first half of the twentieth century whipped European culture from revolutionary romanticism to trench warfare to decadence to Stalin's purges to Hitler to total war, and then somehow back to the highly conventional bourgeois world of the 50s. An artist's mutilation of his own machine seems emblematic to me of this insane era.
Posted by John at 1:34 PM