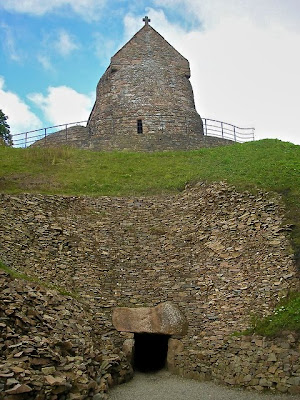 On the island of Jersey, a 12th-century chapel, dedicated to Notre Dame de la Clarté (Our Lady of the Light) on top of a Neolithic passage grave. The Neolithic tomb is aligned with the summer solstice. In the 16th century a new priest, Richard Mabon, extensively restored the chapel and added a window that is aligned with the grave passage, and thus approximately (but not, 4500 years later, exactly) with the summer solstice.

Note to would-be writers of Dan Brown-type religious adventure novels: here is the perfect place to begin your book! Your narrator will become intrigued and try to look up Richard Mabon in the local library. Nothing available. He will search harder, only to be threatened by a mysterious man with a tattoo of the sun on his left hand. . . .
Posted by John at 12:47 PM