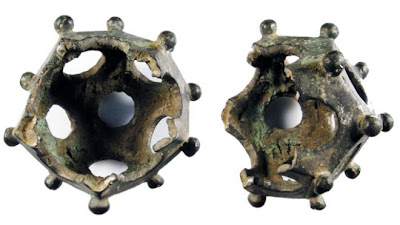 The mysterious objects known as Roman dodecahedra are in the news this week because a metal detector enthusiast found this one in England. Other, more perfect specimens have been found from Scotland to Hungary, more than 60 in all. They range in size from 4 to 11 cm (1.6 to 4.3 inches) across. They seem to date to the second and third centuries AD. Each has twelve pentagonal sides, with a round hole in the center of each side. Most are bronze. Apparently some are stone, although I haven't been able to find a picture of a stone one. 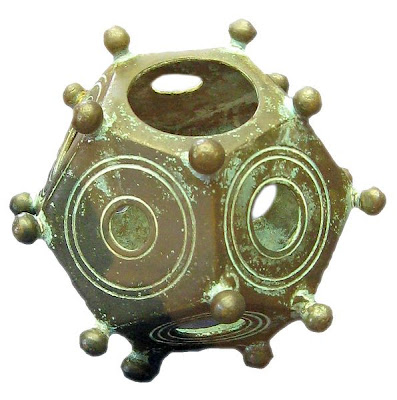 Note that the holes in this dodecahedron are of varying sizes, a feature of many well made bronze examples. 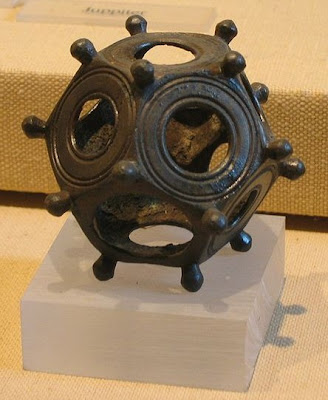 Nobody knows what they are. They look like dice to me, of course. Other theories include candle holders (wax was found inside one), calibration devices for water pipes, and good luck charms. This guy thinks they were astronomical clocks used for calculating the date to plant winter wheat. A majority have been found in Gaul, where they are widely scattered; otherwise they come from regions with a Roman military presence, although not, generally, at military posts.

I confess that I never heard of them until today, and for me there is nothing like discovering a new archaeological mystery to make any day a happy one.

UPDATE: pondering these some more, I wonder if maybe they could have functioned as a kind of oracle, using slips of paper inserted into the holes or some other indication of the choices at issue.
Posted by John at 7:00 AM