More from the World Nomad Games 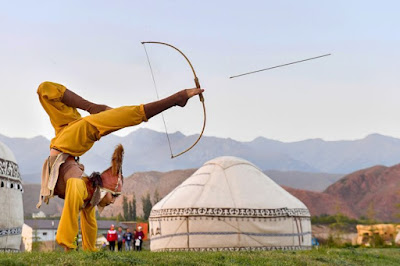 I wrote about last September's World Nomad games before, but Peter Frederick Matthews was there and wrote a great account for the TLS:


The opening ceremony was spectacular. Horsemen and horsewomen charged past, standing their animals' backs or hanging beneath them. Tamed golden eagles were brought through the stands. Warriors wielding long spears acted out combat against men dressed as demons, breathing fire. Five hundred young women wearing pointed hats that ended in a ball of fur (the traditional outfit for unmarried women) danced in unison.

The narrative of the ceremony was similarly ambitious: a history of the world, starting with the big bang and leading to the modern day. The focus lay on the middle of that story, when man tamed the horse and rode it across the plains of Central Asia to Europe, conquering the world. This was a narrative that unified the warrior peoples of the steppe and made onlookers acutely of the presence of Erdoğan and Orbán [leaders of Turkey and Hungary], looking down from above in the stadium's central building.

Following the ceremony came the procession of the athletes, filing past us one nation at a time. Australia had sent a sumo wrestler; the UK was represented by three Scots, there to showcase Highland disciplines. There was a Congolese, a Filipino, a small group of Finns wearing North Face jackets, filming it all on their phones. But the true competitors were the Central Asian states, along with Turkey, Hungary and Russia. When the Hungarians came along, the first ten or so were dressed in medieval armour. They raised their swords in salute and they passed us. Wrestlers followed, yelling gutturally. Orbán rose to his feet, waving on his warriors. . . .

The day after the opening, I went to Kyrchyn gorge – mountain pasture where nomads bring their herds to graze during the warmer months. More than a thousand yurts had been set up in this valley, divided into separate ordos, or villages, based on their region. As you passed through, the owners of one or other of the yurts might invite you in for a meal. Careful ditches had been dug around the perimeter of each to keep the ground dry inside. Occasionally, in a pothole, you would see the fresh blood and innards of a recently slaughtered sheep. The yurts were carefully decorated. Many displayed animal skins. . . .

The gorge was the secondary location for the Games. There was hunting with eagles, bone tossing, horseback archery and dog racing, contests for singing and weaving, oral narration. One event was simply called “honouring a grandmother”. The quickest way between events was to take a horse. It was easy to feel at home in this faux-medieval world. Loudspeakers hidden in wooden towers intermittently played epic movie-soundtrack music. Hungarian archers wandered about looking for a place to charge their phones. A couple of Saudi falconers sat on the ground, drinking coffee. Yaks grazed behind them. Tall Kyrgyz wolf-hunting dogs were led to their starting traps for a race. Golden eagles slept, tied to a post or resting on the back of a stationary horse. As night fell, wedding parties started up, complete with feasting and dancing. Over the five-day festival, more than twenty marriage ceremonies were held in Kyrchyn gorge.

I do understand that this is a thoroughly modern event, staged by autocrats and rich business moguls for a bit of national pride, citizen distraction, and self-promotion. But it is still a little wonderful to me that these skills survive.
Posted by John at 8:11 PM

I'm a Hussar, I'm a Hun
I'm a wretched Englishman
Routing Bonaparte at Waterloo
I'm a Dragoon on a Dun
I'm a Cossack on the run
I'm a horse soldier, timeless, through and through

Well, I's with Custer and The 7th
Seventy-Six, or Seventy Seven
Scalped at Little Big Horn by the Sioux
And the tears and devastation
Of a once proud warrior nation
This I know 'cause I was riding with them too

And I drank mare's blood on the run
When I rode with the Great Khan
On the frozen Mongol steppe while at his height
And I's a White Guard, I's a Red Guard
I's the Tsar's own palace horse guard
When Romanov was murdered in the night

Well I'm a Hussar, I'm a Hun
I'm a wretched Englishman
Routing Bonaparte at Waterloo
I'm a Dragoon on a Dun
I'm a Cossack on the run
I'm a horse soldier, timeless, through and through

Well I've worn the Mounties' crimson
If you're silent and you'll listen
You'll know that it was with them that I stood
When Mayerthorpe, she cried
As her four horsemen died
Gunned down in scarlet, cold as blood

On hire from Swiss to Sweden
Be me Christian, be me Heathen
The devil to the sabre I shall put
With a crack flanking maneuver
I'm an Uhlan alles uber
Striking terror into regiment of foot

Well I'm a Hussar, I'm a Hun
I'm a wretched Englishman
Routing Bonaparte at Waterloo
I'm a Dragoon on a Dun
I'm a Cossack on the run
I'm a horse soldier, timeless, through and through