Today's Place to Daydream about: Ephesus 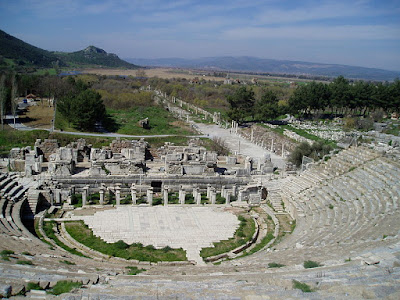 Ancient Ephesus – now Efez, in Turkey – was one of the great cities of Ionia and it now boasts one of the most spectacular collections of ruins from the classical Greek world. 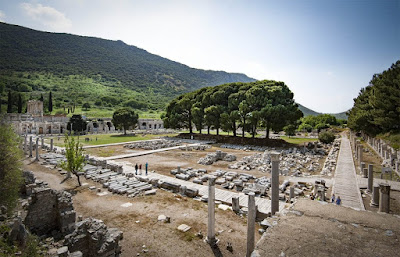 The city is an old place and has produced many artifacts from the Bronze Age; scattered inscriptions hint that it was a city called Apasa that is mentioned in the records of the Hittite Empire. (The commercial agora. The city had two agoras, one for commerce and one for state business.) 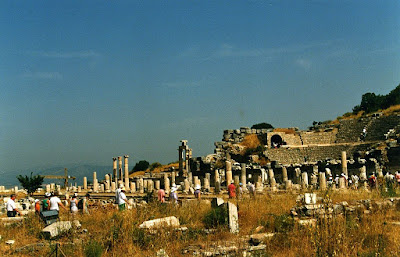 Colonists from Attica in Greece arrived in the 10th century BC, refounding the city in a slightly different location. According to legend the founder was a prince of Athens named Androklos, who had also conquered Samnos. When he wanted to found a city he sent to the Oracle at Delphi, which told him, "A boar and a fish will guide you and will mark the place where the city should be founded." Androklos was openly skeptical of this peculiar advice, but then one night in his camp a fish jumped off the grill and landed in a nearby bush, frightening a wild boar that had been hiding there. Androklos hunted the boar and and founded the city at the place where it was killed. Which makes me wonder, did ancient Greeks take these crazy stories seriously? 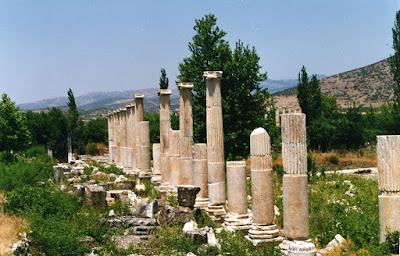 The city prospered. Its history records a long struggle against Asian empires: sacked by the Cimmerians, ruled at times by the Lycians, the Lydians, and the Persians. The local government vacillated between tyranny and rule by an aristocratic council. In 499 BC Ephesus joined the Ionian Revolt against Persian rule, the event that precipitated the Greco-Persian Wars. The decisive event of the Revolt was the Battle of Ephesus, fought just outside the walls of the city in 498 BC, a complete Persian victory. By 493 BC the Persians had regained control of Ionia and all was well for them. If only they hadn't felt the need to punish Athens for assisting its Ionian friends. . . . 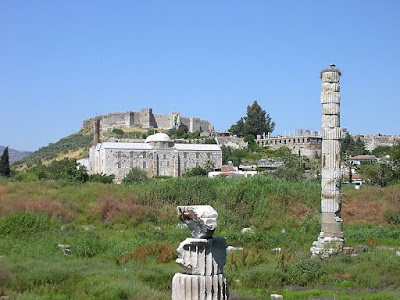 The city's pride was the famous temple of Artemis. The classical version was probably built in the 560s BC, largely funded by King Croesus of Lydia, who had recently taken control of Ephesus. This was for a time the largest structure in the Greek world. That version burned in 356 BC, allegedly set on fire by a lunatic named  Herostratus. The rebuilt version was famously splendid and became one of the Seven Wonders of the World. As you can see there is little left at the site; but on the other hand behold the historical richness of the Ionian coast, where you can see the site of a famous Greek Temple, a fourteenth-century mosque, and a sixteenth-century castle in a random view. 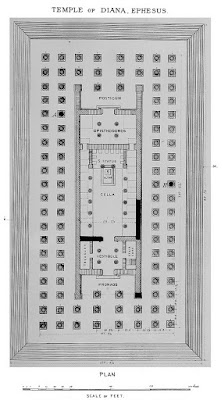 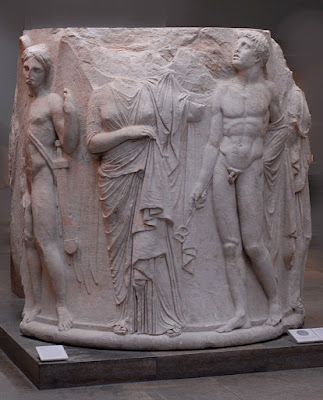 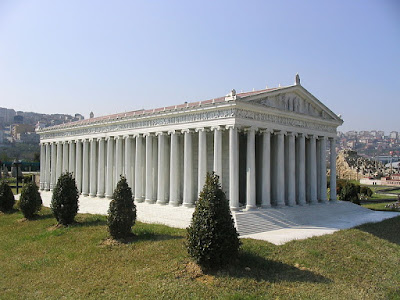 The first picture in this set shows the plan of the ruins made by John Turtle Wood after his excavations in 1869. He removed numerous sculptural bits from the site, some of which went to Istanbul and others to the British Museum, including this column base. The last image shows the temple as reconstructed in Miniaturk.

Besides the great size and beauty of the building the statue was noted for its famous statue of Artemis. This is very un-Greek, obviously based on Middle Eastern statues of their great goddesses. It has long been disputed what all those things are on her chest. Some say breasts, and called this the "many-breasted Artemis." But I agree with those who say they look more like some sort of decoration hanging from her breastplate than part of her body; indeed there are some painted versions in which the face and hands are one color, the clothes another, and the things on the chest are in the color of the clothes. As to what they might be, opinions differ on that, too, but one version is the testicles of sacrificed bulls. 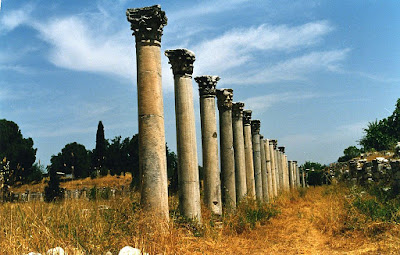 The best known resident of classical Ephesus was the philosopher Heraclitus, who flourished around 500 BC. He was most famous for his belief that change was the essence of the universe, expressed in his famous aphorism, "No man ever steps in the same river twice." Much of the speculation ancient Greeks engaged in about the universe was about change: how it could happen, how important it was, how things could change yet somehow remain essentially the same, as with a person growing older. Some, like Plato, ended up thinking that changes was essentially illusory and what mattered was eternal, while others like Heraclitus went to the opposite extreme. Heraclitus was also known for believing that all politics was a stupid waste of time. 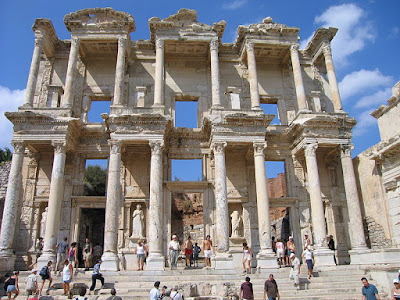 The most famous monument at the site is the facade of the Library of Celsus, built around 125 AD. This was reconstructed on the original foundations out of fragments lying around the site. 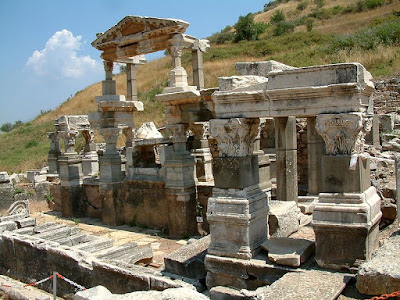 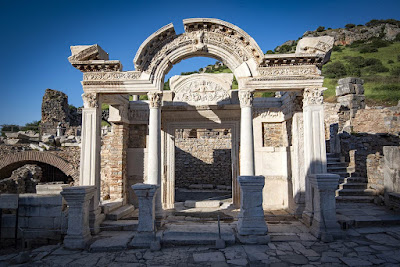 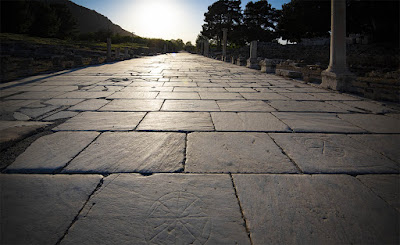 The Marble Road, a Hellenistic construction. 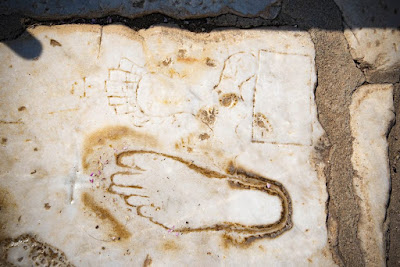 On the Marble Road


you can discover what people believe to be the oldest advertisement in the world. And it is probably not a coincidence that it was marketing the oldest profession. It points out to the Private House, a hidden (but not so secret) brothel. The carvings in the marble show a distinct image of a foot, together with an image of a cross, a heart, a woman, a purse, a library, and a hole in the rock. There are different interpretations of course, but in general, researchers agree that it has to be something along the lines of this: on the left at the crossroads, you can purchase women’s love. The footprint and the hole were a test to know if you were eligible to buy their love. If your foot was at least as big as the one carved into the marble, and you had enough coins to fill the hole, you were good to go. If not, then there was alternative and more enriching entertainment at the library.

That description and photo, along with others in this post, came from this site, which bills itself "The Ultimate Ephesus Guide" and certainly has a claim to be what it says. If you are considering a trip to the site I highly recommend it. 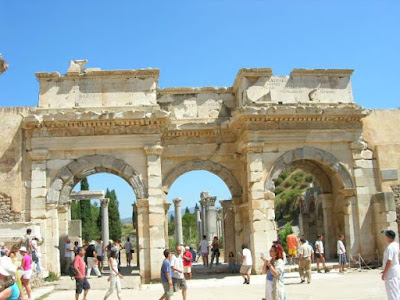 Gate into the Agora. 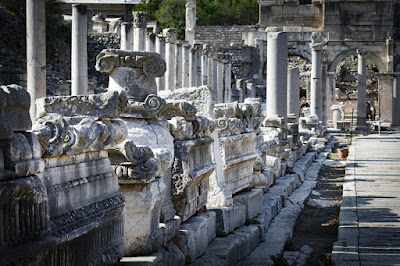 Collection of sculptural bits arranged along the commercial agora. 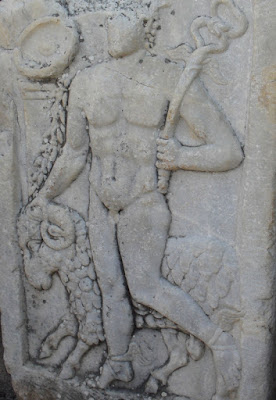 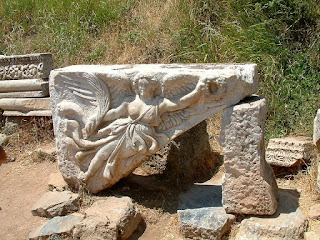 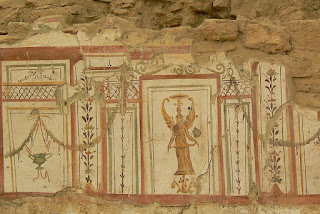 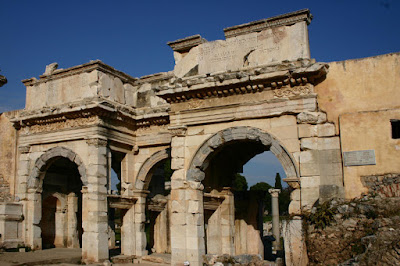 Truly an array of wonders, and a place where so many famous ancients walked: Heraclitus, Herodotus, Pompey, Hadrian, St. Paul. Wish I could have been there today. 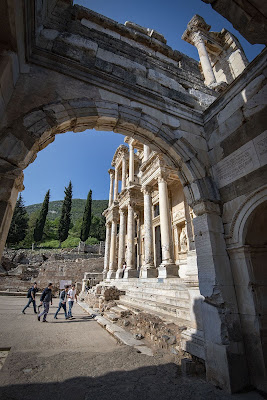 According to legend the founder was a prince of Athens named Androklos, who had also conquered Samnos. When he wanted to found a city he sent to the Oracle at Delphi, which told him, "A boar and a fish will guide you and will mark the place where the city should be founded." Androklos was openly skeptical of this peculiar advice, but then one night in his camp a fish jumped off the grill and landed in a nearby bush, frightening a wild boar that had been hiding there. Androklos hunted the boar and and founded the city at the place where it was killed. Which makes me wonder, did ancient Greeks take these crazy stories seriously?

Any why not? Countless modern people believe that communion wafers and wine literally transmute into the flesh and blood of a man who died nearly 2000 years ago - a man who they also believe was literally the child of a god, born of a virgin, who walked on water and healed the sick and blind with a touch or a word, etc.

In comparison, it's FAR more believeable that an Athenian prince was having some fish cooked for dinner during a hunting party when someone spotted a boar nearby, and when they chased it through the wilds for the hunt the prince looked around and thought, "Huh! This would be a great place to found a city!", and the other connecting details and "embroidery" like the fish leaping from the grill and scaring the boar simply got added in the retelling.

We noticed you had mentioned our Ephesus guide.
Would you mind dropping us a note via our contact form, please?