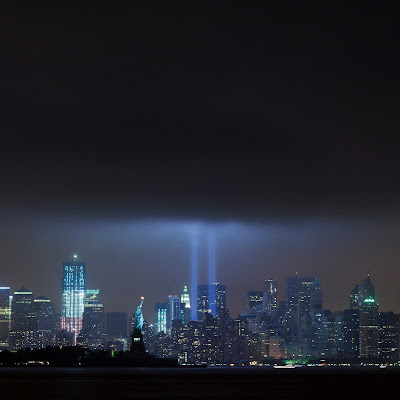 Violence begets violence. This is the lesson of 9-11. Whatever al Qaeda was really trying to do on that awful day, they succeeded in one thing at least: ratcheting up the level of violence in the world.

Looking around the world at people stranded in wretched refugee camps or under the boot of cynical dictatorships, it is easy to understand why some of them are drawn to extremism and violence. Yet the main, and maybe the only, result of all their killing and dying has been more killing and dying. What shining progress has their been to justify the devotion unto death of the bombers? Where are the Muslim regimes truly devoted to raising up the humble? Nowhere. The sacrifice they offered has only been swept up by the whirlwind and carried away into nothingness.

George W. Bush had a good line in his response to the 9-11 attacks: "We must not let the principle of violence prevail." Yet his way of fighting back against violence was to unleash more violence, wars in which more Americans have died than have ever been killed by terrorists, wars that led to hundreds of thousands of Muslim deaths. Because violence is a principle, an act that becomes habitual, a way of thinking that corrupts our souls even when we must turn to it.

I remember very well the strange days that led up to Bush's invasion of Iraq, in which people and institutions I had trusted spoke out in favor of this war I was sure would be disastrous. What these advocates said, more or less, was "something has to be done." The unending cycle of political oppression and economic misery across the Middle East would only breed more violence if it was left unchecked, so something dramatic had to be done to turn things around. As to what that dramatic something might be, nobody had any ideas other than war.

People wanted to fight. Tens of thousands actually enlisted in the military or the CIA to take the fight to the enemy. I remember a debate on Andrew Sullivan's blog, in 2004, in which Sullivan complained that Bush's policies were not working and many commenters said, "Sure Bush is no genius, but at least he is a fighter, and we need to fight."

This is how millions saw 9-11; we have been attacked, we need to fight back hard. I guess we showed the world one thing, that bombing the US is a very dangerous act.

But it may be that we have been just as dangerous to ourselves as to anyone else. In that way we resemble the terrorists, who have unleashed a hundred times more terror on their own people as they ever did on their enemies.

I am no pacifist, and I freely admit that sometimes violence works. But violence is not just any tool. It is a principle, a principle at odds with others we may hold more dear: peace, justice, family. All too often it leaves political arrangements just the way they were, except with more hate and bitterness. Consider the case of Israel and Palestine:


No single episode has shaped Israel’s population and politics like the wave of suicide bombings perpetrated by Palestinians in the first years of the 21st century. Much of what you see here in 2019 is the aftermath of that time, and every election since has been held in its shadow. The attacks, which killed hundreds of Israeli civilians, ended hopes for a negotiated peace and destroyed the left, which was in power when the wave began. Any sympathy that the Israeli majority had toward Palestinians evaporated.

More often than not, violence begets only evil.

If, in the end, you need to live with your enemies, you always have to ask how killing some of them is going to help. For the US I think it is vital to recognize that we simply do not have the power to change who people are, and that storming around the world overthrowing governments is no kind of solution. Even when we succeed, in the sense of overthrowing an evil regime, the boost we give to the principle of violence may in the long run only make the world more dangerous.

Here is Tom Friedman, ruminating on the question of whether the US should be sending troops to promote democracy in other countries:

The only Arab Spring country that was able to make the transition (albeit still tentative) from dictatorship to democracy, and to power-sharing between Islamists and secularists, was Tunisia — the one Arab country America had nothing to do with.

Libya remains a rubble-strewn disaster zone. Syria is a nightmare. All my friends with ties to Egypt say that things are much worse there now than before the first protests launched a season of revolution.

Because violence is fire, is lightning, is a volcano. When you unleash it, you know only one thing: more violence will follow.

Sow the wind, reap the whirlwind.
Posted by John at 7:53 AM

Amen, brother, is all I can say. One only needs to add that the United States has been an extraordinarily violent society since its very inception and even before. The 20th century was replete with gratuitous American violence - the Philippines, Cuba, Russia, Korea, Vietnam - a very long list of countries that suffered from American military violence. In that sense, sadly, 9/11 was nothing unusual and American reaction to that tragic day was equally not unusual.