Football and the New Europe 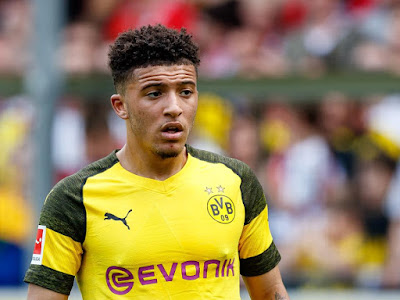 One of the stars of German football (soccer) this year is a 19-year-old Englishman named Jadon (pronounced Jayden) Sancho, child of immigrants from Trinidad. He is a representative of the new world in soccer, which is so much like other parts of the new economic world that I can't resist pointing out the parallels.

In each of the big European countries top level football is dominated by a few super teams that can afford to assemble a roster of international stars. The top team in Britain so far this year is Liverpool, which has an amazing front line featuring one Egyptian, one Brazilian, and one Senegalese. Most of the other teams in their leagues offer no competition to these super teams. Instead they compete against each other in a new international tournament called the UEFA Champions' League, where you can see the top teams in the English Premier League square off against the best teams from Germany, France, Italy, Spain, and the Netherlands, plus a few teams from other countries that never win. Many aficionados think these games are better than World Cup games between national teams, because the super teams play together all year round, and because they have been carefully assembled from the world's best talent to compete in a certain style. The winning team last time (Liverpool) netted $90 million in prize money.

The money involved in European football is staggering; clubs regularly sell players to each other for amounts of more than $100 million. In 2011 a group of investors led by the Sultan of Qatar purchased Paris Saint-Germain and made the club into a super team by shelling out more than $600 million for a roster of international stars. (That's just the transfer fees; the salaries are equally exorbitant.) They have since won six French championships in a row, but keep spending to sign top players because they have yet to win the Champions' League. The current roster has players from 13 countries.

The overall result is swelling inequality. At the top the players make tons of money and fans enjoy a superb product, likely the bast football ever played. Everywhere else falls farther and farther behind. Leagues from Argentina to South Korea have been stripped of their top talent, since all those players are in Europe. In Europe most teams are out of contention before the season begins and never expect to be in it; in the past decade only two teams have won the German, French, or Italian Leagues, and in England people joke about the "Everton Cup," that is, first place among all the teams other than the six with the resources to compete internationally.

And that, my friends, is the New World Order: at the top, great wealth, extraordinary talent, a product that hundreds of millions love. Everywhere else, stagnation and a struggle to keep afloat.
Posted by John at 2:39 PM

And that, my friends, is the New World Order: at the top, great wealth, extraordinary talent, a product that hundreds of millions love. Everywhere else, stagnation and a struggle to keep afloat.

...what about this is new? Aside from the fact that the people at the top are actually undeniably talented, whereas in the past that was frequently not true?

Meritocracy is better than Nepotism. The trouble is the inequality.

But that's what you get in a Capitalist system. Those with capital use it to get ever more capital, at the expense of those without capital. The rich get richer, the poor get poorer. If you want a society without inequality, you need an economic system that fights against inequality - not one that promotes it by rewarding wealth with more wealth, and punishing poverty with more poverty.

When society's first concern is profitability, this is the natural outcome.