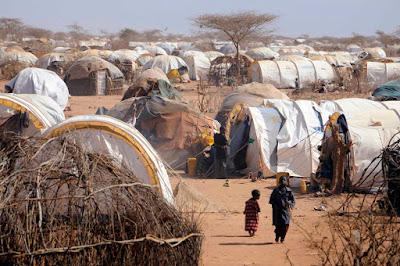 This book was a lucky impulse buy for me. Wandering in an independent bookstore, the kind I wish the world had more of, I considered that I ought to show my support by buying something, and this was to hand and looked interesting so I bought it. I'm glad I did, because it is amazing and eye-opening and not in my public library.

Ben Rawlence is a former researcher for Human Rights Watch turned journalist, and City of Thorns (2016) chronicles life in Kenya's Dadaab refugee camp, at that time (2010-2015) the largest in the world. Nobody is sure how large, since the Kenyan government forbade the UN to take a census, but best estimates for the peak population come in around 800,000 people. Most of them were Somalis, fleeing the war that has torn their country apart for a generation. There were also Ethiopians, who fled a civil war in the Ogaden region that most westerners have never heard of, and a few others. These days the camp still exists but has shrunk to about a quarter of what it was it its peak, most of the residents having gone back to Somalia or vanished into Kenya's large Somali population.

Rawlence tells the stories of nine camp residents, based on extensive interviews with them and what others told Rawlence about them. You might think that this would be a very depressing book, but I did not find it so. Yes, it is full of horrors, from starvation to corruption to suicide bombing. But it is also a tale of amazing resilience, of people getting on with their lives despite terrible hardship, and of generosity. Rawlence would probably dispute that last, since he spends much time complaining about the refusal of most nations to accept more than a trickle of refugees, and about the harsh discrimination against them, but it was the kindness of strangers that kept all these people alive through decades of war and a terrible two-year drought. 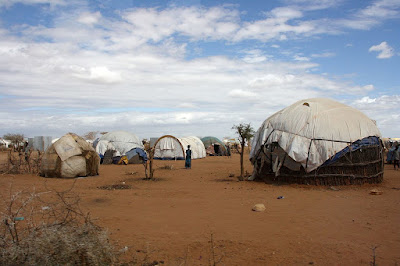 Almost all the people in the camp lived in shelters like the ones shown in these photos, a frame of wood cut from scrubby thorn trees covered with UN tent fabric. Around them was the bare red soil, dust in the dry season, mud when the rains came. Water came from deep wells, distributed to central pumps where people collected their daily ration in plastic bottles. Rations had to be collected every two weeks by waiting in a long line.

Dadaab was set up in 1991, and Rawlence met people who had been there ever since. Some of those early arrivals prospered in the camp's weird economy, based on UN food aid, other kinds of relief, work for relief agencies, and smuggling. Sugar, in particular, was smuggled from Somalia into Kenya on a massive scale, to avoid Kenya's high import tariff; after reading about the amount smuggled and the complicity of the police one can only assume that the tariff exists mainly to allow well-connected Kenyans to take a cut of the smuggling profits. Some of those early arrivals had founded thriving businesses selling things like cell phone time, television watching, vegetables, meat, clothing, household goods, and khat, the ubiquitous drug of the Horn of Africa. It is fascinating to see that even among people who would all be considered desperately poor in the US there are differences in wealth that seem very important to the people of Dadaab.

In 2010, before the crisis of the great famine, two week's rations for an adult consisted of:

That's enough calories to live on, but since in fact most residents sold some of them to get money for phone time or television time or vegetables or to save for a wedding feast or a thousand other things, many people were slowly starving. And that was before the crisis.

The horrible famine of 2011-2013 was caused by a complete failure of seasonal rains two years in a row, exacerbated by the ongoing war. Half a million more people became refugees, and thousands died, many of them in the desert on their way to Dadaab. The arrival of hundreds of new refugees every day for months, many of them close to death, led to a huge crisis that got the attention of the world media and led to surge of donations, which eventually brought the crisis under control. But for a while the situation was very grim. The UN issued ration cards to everyone who showed up at the camp, under the assumption that nobody who was not an actual refugee would want to live on flour, beans, and rice in a squalid refugee camp. But during the crisis thousands of Kenyans came to the camp, because at that time there was no food anywhere else in the region. 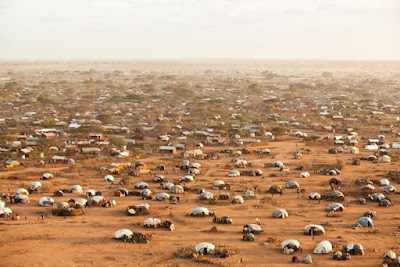 There were other ways that life in the camp was better than outside it. The Medical care provided by NGOs was better than that available to many Kenyans. Education was also provided, primary school for all children and high school for a select group. One of the mothers Rawlence chronicles thought at one point about going back to Somalia but decided to stay in the camp because there her daughter could continue in school, which would be impossible in Somalia.

In Rawlence's telling the worst dangers of life in Dadaab were not physical but psychological. One of the rules set by the Kenyan government was that the refugees could not work, so they would not take jobs from Kenyans. Many did anyway, for example for the smugglers or for businesses in the camp, but this was difficult and many could find nothing to do. (Those who worked for aid agencies were theoretically "volunteers" and were paid only a tenth of what a Kenyan got for the same job.) Getting by day to day on their UN rations, any spending on entertainment paid for by going hungry, nowhere to go, nothing to do, nothing to see but red dust, thorn trees, and huts roofed with UN tenting, many fell into despair. They dreamed about being accepted for resettlement in Europe or Australia, but less than 1 percent ever were. They fantasized about heading across Africa to the Mediterranean and boarding a boat for Europe, but that is expensive and many who tried were robbed and ended up stranded in some other nowhere place even farther from home. Of those who did make it to the sea, many were drowned. The refugees in Dadaab knew this, but in certain moods they said they would rather die trying to reach Europe than live any longer in the noplace of Dadaab. 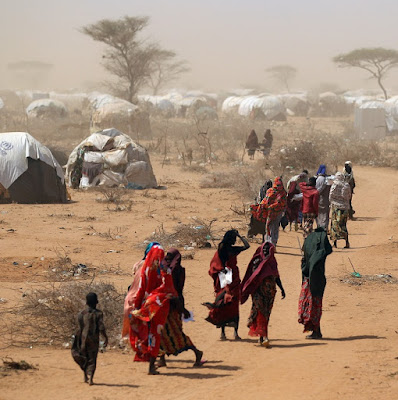 Yet most went on: working when they could, finding ways to amuse themselves when they could not, marrying, raising families. Among other things they created soccer leagues with several different levels of play, mosques, churches, musical groups, and a radio station that broadcast stories of refugees collected by refugee reporters. The Muslim extremists who ruled much of Somalia, al Shabaab, tried to recruit in the camp but found very few supporters; the refugees had fled from them and their violence and even the promise of power and regular pay tempted only a few to join them.

Many westerners are dubious about creating refugee camps and keeping them running for decades. Do the camps, perhaps, keep conflicts going longer by creating a sort of safety valve where threatened people can flee and survive, rather than facing the prospect of surrender or death? Do refugee camps keep people living in places where the environment simply will not sustain them? Do they efficiently prevent people who must move from assimilating into their new homes? Maybe. But they also give victims of war a chance to live again.
Posted by John at 7:39 PM