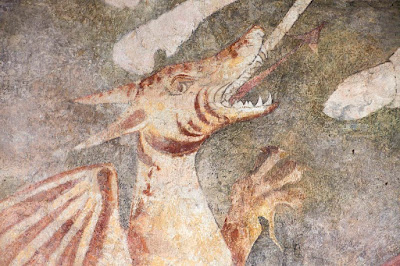 St. George slaying the dragon, St. Lawrence's Church, Broughton, England, c. 1400. The medieval wall paintings were painted over during the Reformation and then rediscovered by workmen in 1849.

Mongolian heavy metal, with bizarre instruments and a call (according to the subtitles) for the return of the Mongol empire.

More than 100 seal pups were born this year on the banks of the Thames River in England, once one of the world's most polluted waterways.

Once upon a time Elizabeth Warren was an intellectual with all sorts of interesting ideas, and she regularly attacked liberal orthodoxy and mainstream feminism. Then she entered politics.

In 1994, Edward Luttwak predicted that globalization and increasing economic insecurity would lead to a resurgence of Fascism.

The positive psychological effects of extreme religious rituals, like being nailed to a cross. More evidence that we did not evolve for lives of comfort and security.

The Florida Shuffle, an insurance scam that pays addicts to occupy beds in rehab centers while still supplying them with drugs.

In conversation, "the aversion to asking sensitive questions is both costly and misguided."

In Germany, NIMBY's rally against wind power. Germany gets about 20 percent of its power from wind, and would like to double that, but over the past year every proposed site has been opposed by locals and permits for new units have fallen 82 percent. I don't think there is a feasible way to get 100 percent of our power from solar and wind, which means if we want zero carbon we need nuclear.
Posted by John at 7:09 AM

"we did not evolve for lives of comfort and security"

I've never understood the pervasive romanticization of "struggle", and the notion that someone could only ever be satisfied or happy when under constant pressure.

I genuinely labor to fathom why certain people do things like climb Mount Everest, or seek to go from being a multi-millionaire to a multi-billionaire, or go on safari and shoot lions, et cetera. I can't help but find it terrifyingly psychopathic.

I imagine it comes in part from some of our ape ancestry, but also from the broad history of human society and our overwhelming cultural acclimation to things like warfare, patriarchy, authoritarianism, etc.

People spent so long living under brutal, monstrous systems that they developed ways of viewing those systems as not just "necessary" or "natural", but even somehow "good" or "ideal". When you can convince slaves to defend their own slavery, you've got a largely self-perpetuating system.

Well, I certainly like having someone with me (:-)). But I would not go so far in my condemnation of the challenge-seeking personality type. It looks to me like challenge-seeking personalities can sometimes be quite useful to the larger group, just as comfort-seekers can be a problem. FWIW, I think the strongest human groups are those with the widest variety of personality types mixed together. It can be difficult for them to get along, which may be part of why we developed such elaborate social skills (recognizing tiny changes in mood from slight movements of the facial muscles, etc.) and why, among our range, the diplomatic personality type found an important place in the mix.

My point was that one should not make the mistake of assuming that a certain type is the universal type that is everyone's, or is the default or most natural or proper or best state for humans. Especially, one should not proceed as if deep down there's a "real" type that everyone has if only they could shed some sort of repression or social training.