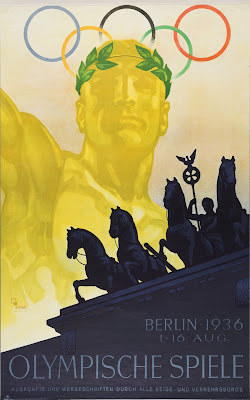 For most of my life the niche of "people who seem too interested in the Nazis for their or our good" was mainly filled by war buffs. After all the Werhmacht really was an amazing war machine, and the Nazi bid for supremacy as a stark act of mechainzed Will to Power had something awesome about it. It was a common theme of discussion among table-top wargamers that the designers were all pro-Nazi, assigning German units higher strengths than history suggests they deserved.

Anyway I was thinking about that because of a new art exhibit in the Netherlands focusing on Nazi design. Fascism after all was partly an aesthetic movement. Its central rituals were massively choreographed displays of uniforms and precision marching, and its leaders were very interested in cultivating a style to match their swagger. In writing about 1945 Tony Judt found several witnesses who mourned the fall of Nazism as an aesthetic catastrophe; one wrote, "I will never see anything truly beautiful again."

If the Times has it right, the curator of this exhibit is mainly a rebel bad boy who wants to tweak the noses of earnest liberals:


In an interview with De Volkskrant, a Dutch newspaper, last year, he positioned himself as a renegade, describing the Dutch museum world as “too feminine” and “destructively politically correct.”

But his exhibit makes many people nervous because of the return of far-right politics in Europe. Is now really the time, critics ask, to remind people that the Nazis had cool posters?

Will we now see a category of suspiciously pro-Nazi people who claim to just be interested in their design, you know, because of its technical excellence?

The Nazis are fascinating, even to many liberals, even to many Jews. They just are. I am very curious about them, and honestly I would probably read more about them if I didn't sometimes get a sense of personal corruption and complicity from doing so.

And yet they are not like the medieval Mongols or the Assassins, far enough away from us that no harm can come from admiring their efficiency. The Nazis still have real followers determined to do evil things. As I said, I don't read much about the Nazis any more because I have the guilty sense that paying so much attention to them only feeds destructive politics in our own time. But I have a hard time condemning others who give in to the temptation to watch.
Posted by John at 7:38 AM

There is certain beauty of form in a well made sword, or in a finely crafted gun.

But we must constantly remind ourselves that such things are tools of evil, that should be understood and respected, but never loved, idolized, or worshipped. We must nurture a healthy revulsion in our hearts for such things, because their only purpose is to destroy, which is at best a necessary evil, and at worst an unforgiveable one.

The Nazis and their accoutrements are no different. There is a certain beauty of design in many of their tools, but we must not allow ourselves to forget or to ignore that these were the tools of evil. We can be fascinated by them, and we absolutely should study them, come to understand them, and respect them for what they are and what virtues they may posess- but we must always, always resist the temptation to overlook their sinister natures and purposes.

It is easy, in safety and comfort, to see a gun as a thing that is fun and entertaining, making loud bangs and smoke like a magic wand of fireworks.

But to truly see a gun for what it is, you must see it from the wrong end of the barrel - you must come under fire from it; feel its hot death screaming past your ears and kicking up dirt and mud behind you; feel the panic and terror well up in within you; feel your stomache churn your throat convulse with retching; feel your boiling blood racing through your fragile veins at dizzying speeds; feel the adrenaline haze robbing you of your senses.

How quickly love for a weapon turns to hate, once it draws blood that we care about.