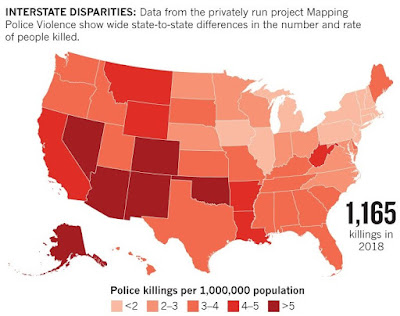 The high-profile police shootings of 2014 focused attention on the problem of police violence in America. Researchers quickly discovered, though, that the data needed to seriously study the problem did not exist. The Obama administration got the FBI to begin a nationwide effort to track police use of deadly force, and that effort is now up and running and should provide better data going forward. Meanwhile several private groups have started their own efforts, including The Washington Post, which right now probably has the most comprehensive database.

These efforts have revealed that US police kill about 1,100 citizens a year, which is twice what the FBI counted under its old system. With this expanded dataset it is possible to explore many sorts of variation. One thing that jumps out is regional and local variation; the rate of police killings in Arizona is four times what it is in Illinois. 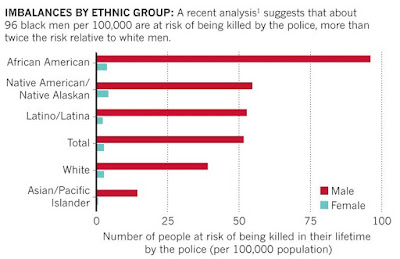 This chart shows variation by race, but counted in a weird way, by lifetime chance of being killed; since the rate of violence in America varies so much from decade to decade I would much prefer a chart with annual death rates. Anyway this shows that a black man in America has about a 1 in 1,000 chance of being killed by the police, 2.5 times the rate for white Americans. (Of course that means a majority of victims of police shootings are white, since there are 5 times as many white Americans as black.)

One thing experts are fighting about right now is the exact mechanism of the disparity. I mean,  racism is surely behind this at some level, but how? There is some evidence that black Americans are several times more likely to be stopped by the police than whites, so it may be that the chance any given encounter will lead to violence might be no more, or even less, for blacks, and the rate of killings is just higher because there are more encounters. But since the data on who the police stop and question is very poor, it's hard to say. Those local disparities also come into play; more blacks may live in the sort of high crime, high violence neighborhoods where the police are on hair-trigger alert. Because while some cops are just brutal and violent, most shootings happen because the officers are scared. Maybe they are more scared than they should be, and quicker to reach for their guns than they should be, but more than 50 cops are shot and killed each year, so the risk to them is real.

The root cause, I believe, is a breakdown in trust between the police and the people they are supposed to be protecting, and since that is a reflection of a general breakdown in how much Americans trust each other, it is going to be a hard problem to solve.

On the other hand there is some evidence, presented here, that the sheer number of guns in the US is a big factor; maybe the police are more scared because the people they deal with are just more likely to be carrying a gun.
Posted by John at 8:18 AM

On the other hand there is some evidence, presented here, that the sheer number of guns in the US is a big factor; maybe the police are more scared because the people they deal with are just more likely to be carrying a gun.

Our police don't operate like public servants sworn to serve and protect their local community - they operate like soldiers occupying a foreign country.

When you spend every moment of every patrol paranoid that any random civilian on the street might secretly be waiting for you to let your guard down so they can pull out a hidden gun and start shooting, you end up neurotic and acting like a psychopath.

When anyone seems like they might potentially be "the enemy", then everyone becomes "the enemy". When any deviation from expectations or orders is interpreted as a potential life or death threat, then every deviation becomes that.

...none of which is to excuse the police for their constant refrain of cowardice, of course. Our officers are woefully undertrained and shamefully. overprotected, and it makes them self-serving and corrupt.

Their job is to put their lives on the line for others - they are literally supposed to be the best of the best, the heroes of the nation, selfless and noble, willing to die for others, innocent and guilty alike. But instead, we hire thugs and sycophants, people who place themselves first and sacrifice others - who shoot first and ask questions later. It's an utter disgrace.

PLEASE READ PLEASE READ PLEASE READ
Hello everyone, i would like to share my experience on this platform. i have been hearing of Blank Atm for a while and i applied through a few people but i was scammed, not until i found Mr George who saved me from scammers, i got my blank ATM card in 5 days after application and tried the encrypted card in an ATM machine and pos cash store to my greatest surprise i was able to withdraw $3000 and that was the daily rate i applied for. to be honest there is no risk involved the card is not traceable and has an infrared signal that blocks off CCTV during your withdrawals. i just payed my daughters tuition fee and cleared my mortgage debts, i am also richer and started a business that is doing fine. Mr George is really a life saver and he is very genuine. You can contact him with this email address: blankatm402@gmail.com
Best wishes