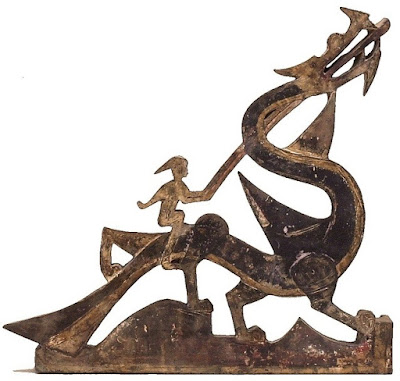 Perusing ancient artifacts on a random Tumblr I stumbled across this, which immediately called to mind my post on the Kargaly Diadem. I tracked these figures back to the Art Institute of Chicago, which says:


These triangular sculptures originally fit under the pitched roof of a burial chamber constructed of clay bricks. The position of similar panels discovered intact suggests that they originally formed two ends of a pediment that divided a chamber in half.

The panels are carved and painted to depict winged figures mounted on dragons striding over hills or waves. In Han mythology, such beings are described as immortals (xian). Having achieved eternal life, these immortals were endowed with the power to fly and roamed freely about the universe. The depiction of these remarkable beings in tombs reflects a widespread belief that the soul of the deceased could leave its earth-bound existence, ascend to heaven, and become an immortal. The ascent of the soul to the realm of the immortals is a major theme in Han art.

Now there's an afterlife I want to get in on: riding around heaven on a dragon. And to think that eight months ago I might have denied that ancient art ever depicted people riding dragons. So much to learn.
Posted by John at 7:33 AM

"The panels are carved and painted to depict winged figures mounted on dragons striding over hills or waves."

This is another one of those archeological trends that bugs me. Don't quite know what something on the back of a figure is supposed to be? It must be wings!

So, what - do these figures also have wings on the backs of their heads?

Occam's Razor, folks. Why would the creator's break their own consistency? Absent any other evidence to suggest it, why would we assume a depiction of wings on figures who are already riding on the backs of flying creatures, when mere mundane clothing blowing in the wind, exactly matching other elements of the work, is the vastly more logical conclusion to draw?