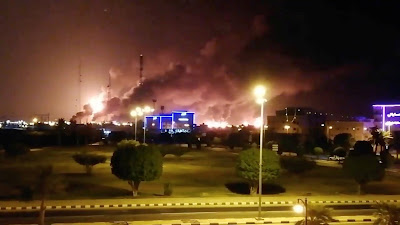 Yemen's Houthi regime has been engaged in a campaign of long-distance harassment against the Saudi oil industry for more than a year, as part of their ongoing war. This week they achieved their first significant success:


Drone attacks claimed by Yemen’s Houthi rebels struck two key oil installations inside Saudi Arabia on Saturday, damaging facilities that process the vast majority of the country’s crude output and raising the risk of a disruption in world oil supplies.

The targeted oil facilities can process 8.45 million barrels of crude oil a day between them, the bulk of production in Saudi Arabia, the world’s largest oil exporter. Saudi Aramco, the state-owned oil giant, said production of 5.7 million barrels a day — well over half of the nation’s overall daily output — was suspended.

Armed drones are so cheap now that any self-respecting terrorist force can use them, and Yemen has used them to launch a damaging strike across 500 miles. I mention this because it is a sign of changing military realities around the world, giving weak states another means of harassing stronger enemies and raising the cost of warfare. This reality is part of why the US military is so nervous about a war with Iran, since Iran can launch enough drones and missiles to shut down the Persian Gulf oil industry and make big trouble for US ships and bases.

Fear of this kind of warfare -- attacks by swarms of drones and cheap missiles -- is driving US military research and development, and is why we are spending billions developing laser weapons. Lasers are lousy weapons for killing people but they can disable drones and damage missiles, and they can fire very fast, perhaps (nobody really knows) protecting US assets from these new threats.

Meanwhile the immediate response of the Trump administration to this attack was to blame Iran, no surprise since they are always looking for things they can be mad at Iran about. And it is probably true that Iran supplied either the weapons themselves or the technical knowhow to make them. But the real cause is the disastrous Saudi war in Yemen, and the way to end this threat is for the Saudis and the Houthis to negotiate a peace.
Posted by John at 8:40 AM

Couldn't have happened to nicer people...