Meanwhile at the World Nomad Games 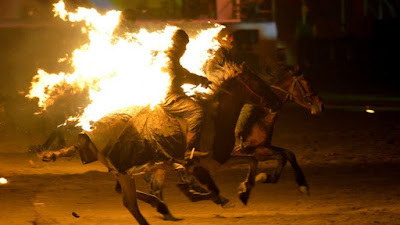 No, horse racing while on fire is not event; this is from the opening ceremonies. Apparently fire riders are a traditional Kyrgyz way of honoring an elite visitor. 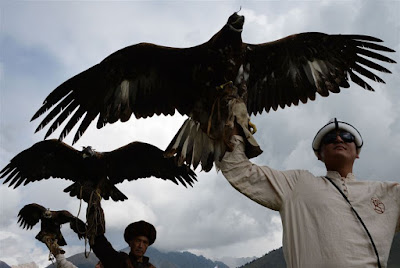 Wikipedia lists the events of the Games like this: 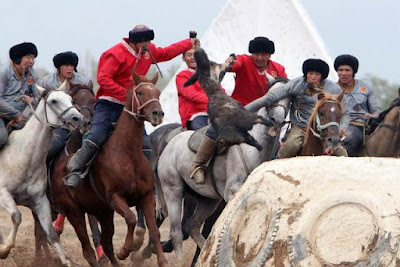 Very helpful to know that Kok-boru is similar to Byzkashi; that explains so much. I take it this is the sport in question. According to The Guardian, this is "the biggest draw and most fiercely contested sport." Looks like a blast.

Weird that Shagai is on wikipedia's list, since it is an old gambling game played with the ankle bones of sheep as dice. But maybe you can get really good at it.

I'm also wondering about Salburun, the trifecta of falconry, hunting, and mounted archery. If the modern pentathlon (running, swimming, horse riding, shooting and fencing) was supposed to represent what a military courier might have to do to bring a message from behind enemy lines, what is Salburun? What a nomad might have to do to get dinner? 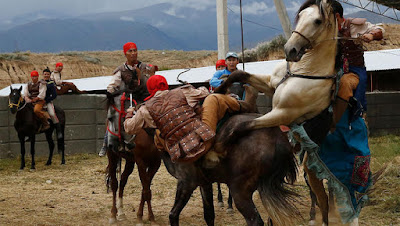 In case you were curious, Er enish is a kind of wrestling done on horseback, with hurling your opponent to the ground as the equivalent of a pin; Toguz korgol is a board game something like backgammon; and Kurash is something like judo. As you can see from the picture above, at Er enish the skill of the horse matters as much as that of the man; this one is kicking the opponent off his horse. According to CBS News this was not part of the games but an impromptu bout that broke out among some men who got bored waiting for the opening ceremonies to begin.
Posted by John at 9:00 PM