KDP C for the SLS 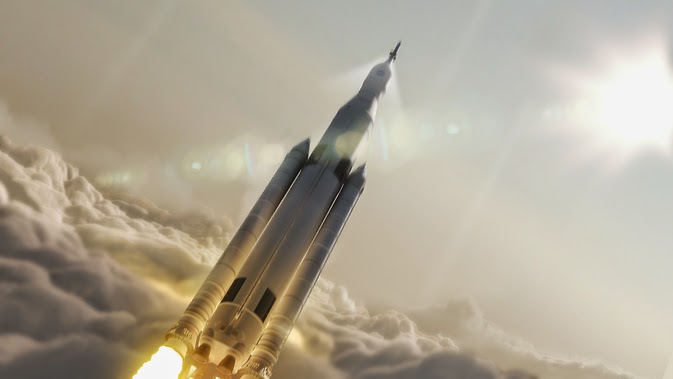 Yesterday NASA announced its decision to go ahead with the most powerful rocket ever built, the SLS, like this:


This decision comes after a thorough review known as Key Decision Point C (KDP-C), which provides a development cost baseline for the 70-metric ton version of the SLS of $7.021 billion from February 2014 through the first launch and a launch readiness schedule based on an initial SLS flight no later than November 2018.

Many space enthusiasts think this is a big mistake. Some think it is foolish to invest $7 billion in a new rocket based on 1970s technology, and they want NASA to leap ahead to ion propulsion, space sails, or something else high tech and clever. (Congress actually mandated that NASA re-use parts from the Space Shuttle wherever feasible.) Others think private companies could do the job cheaper; Elon Musk of SpaceX said he could do it for $5 billion. NASA responds that they are under orders from Congress and the President to launch a Mars mission in the 2030s, which means they need to start developing the pieces now, not wait around for new technologies that may or may not be ready in time. And while private companies have been able to do, at a discount, things that NASA has been doing for fifty years, private companies have no track record of going where no one has gone before; to see what can happen when the government asks private companies to build radically new machines, have a look at the F-35 program.

I still have my doubts about this whole Mars mission business, but I would rather we spent our money on new space rockets than more drones or fighter planes.
Posted by John at 4:10 PM

The pipe dream of a majestic future in space for humanity has gone on far too long, in my mind. It's a shame that we're still wasting resources after all we've learned about the futility of our position.

Space is insanely huge. The nearest star to our own is over four light years away. That means it would take four years of travel at the speed of light to get there... and another four to come back. On more realistic scales, it would take centuries with extant technology, and even theoretical near-future propulsion systems would still mean 50 years each way. It's just entirely unfeasible. We can't possibly extract anything of worth from space when the time it takes to go from point A to point B is measured in lifetimes.

So that leaves us with our own solar system, perhaps. Maybe we can find some valuable minerals on Mars or a nearby asteroid if we're lucky, but would the cost of extracting it and bringing it back to earth be worthwhile? I highly doubt it. It'd have to be massive amounts of some incredibly rare element or mineral - something like platinum - for it to even have a chance of being economical. And even then, when supply increases drastically, demand and prices drop in turn, so that reduces the value of such a find. And even if it didn't, what do we really need something like platinum for? We don't have much of a use for the stuff beyond a few industrial purposes - it's just valuable because it's a rare commodity.

Meanwhile, our planet is going to hell in a handbasket. We've got hugely pressing issues in terms of energy production, global warming and climate change, population levels and food production, pollution, poverty, crime, disease, war, et cetera, et cetera. These are things we need to be working to fix not on a timeframe of eventually, but within mere decades in some cases. How can we justify spending billions of dollars sending robots to Mars when we have so many other more pressing concerns creeping up on us?

And yes, there are other more wasteful human endeavors that also need trimmed - the US Military Budget, for example. We happily throw away untold fortunes making bombs and guns to kill people around the world, and it absolutely has to stop, or at the least be heavily curtailed. But that doesn't somehow excuse wasting resources on space exploration when the world around us might not last long enough for any of it to matter.

I understand that people are awestruck by the universe. We've learned a lot about it within the past half century, and most of it is very humbling and of great value in terms of giving us perspective on the universe and our place in it. But we can't keep clinging to an absurd vision of a pie-in-the-sky future where space is populated by humanity.

The stark reality is that physics is against us. Only a small handful of humans will ever get off this rock. Sure, those fed might theoretically seed a new population of humans somewhere else, but to what point and purpose? With mere communication between our planet and even the nearest star completely untennable do to the absurd distances and time lags involved, what possible value could we get out of colonizing other worlds?