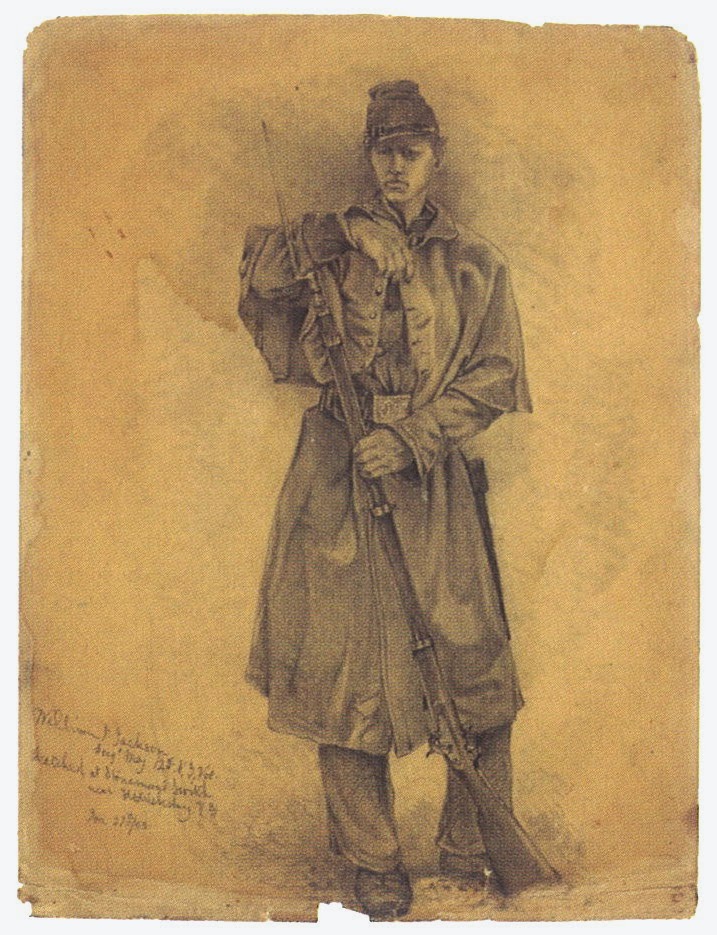 This week I was searching for a particular Civil War sketch of a place where I may do some archaeology and found myself sucked into the world of Civil War artists and their drawings. The American Civil War was fought in the newspaper age, and millions of readers north and south expected daily updates from the fighting. They also expected pictures. So the media magnates of the day obliged them, hiring dozens of draughtsmen to tour the battle fronts and produce the renderings of battle and camp that their readers demanded. (Edwin Forbes, Sergeant William Jackson of the 12th New York Volunteers on Picket Duty, January 27, 1863) 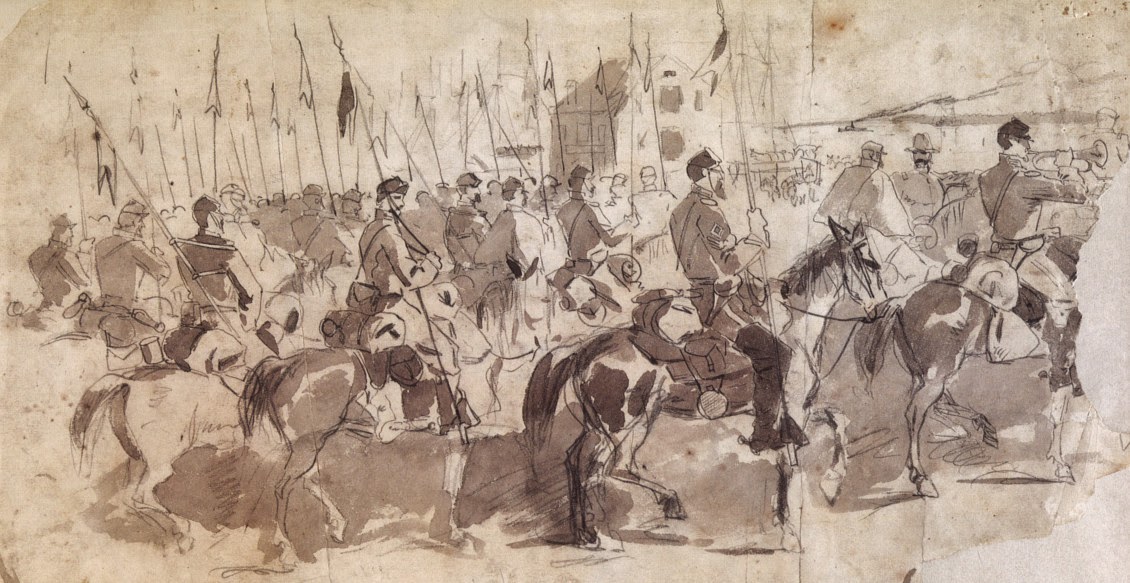 Some of these illustrators were drawn from the first rank of American artists: Winslow Homer, Alfred Waud, Edwin Forbes, Frank Schell. These works were eventually published as engravings, but those were usually made in great haste by men without the subtle eyes of these artists, and I much prefer the original drawings. Above, Winslow Homer, the 6th Pennsylvania Cavalry Embarking for the Peninsula, 1862. 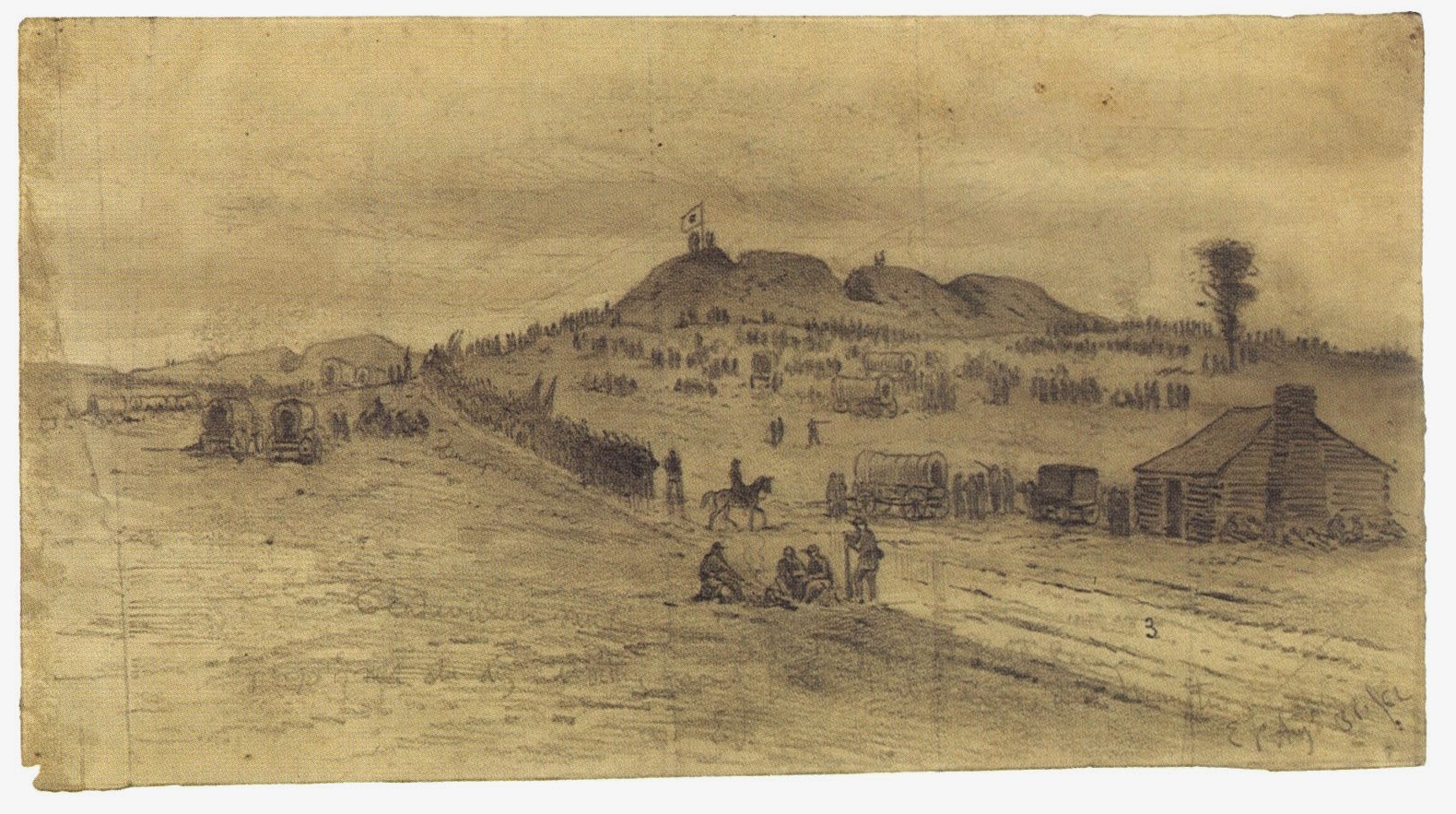 The usefulness of these works for military history is quite limited. The artists were not soldiers and often had only the vaguest idea what was happening in front of them, and for the details of uniforms and weaponry you are better off with photographs. But they are extremely useful sources for social history. As I have mentioned before, there are remarkably few surviving nineteenth-century photographs or drawings of ordinary houses and farms. America was full of houses like this one in Centreville, Virginia, sketched by Edwin Forbes because it happened to sit beside the road down which Pope's defeated army retreated from Manassas in 1862. Hardly any of these crude structures still stand, and if the fields where they sat have been plowed, there is next to no archaeological trace of them, either. Just about the only time anyone bothered to record these houses was when they happened to sit in the middle of a battlefield. 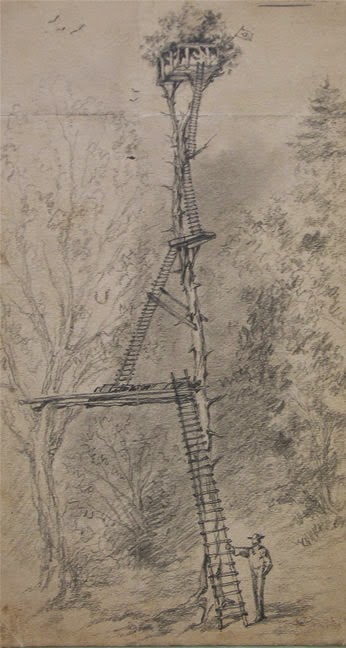 So that is why I often consult these renderings. But I find that they summon up the Civil War world for me in a powerful way. The feeling I get from them  is completely different from that I get from photographs (Edward Mullen, Crow's Nest Signal Station along the James River, 1862) 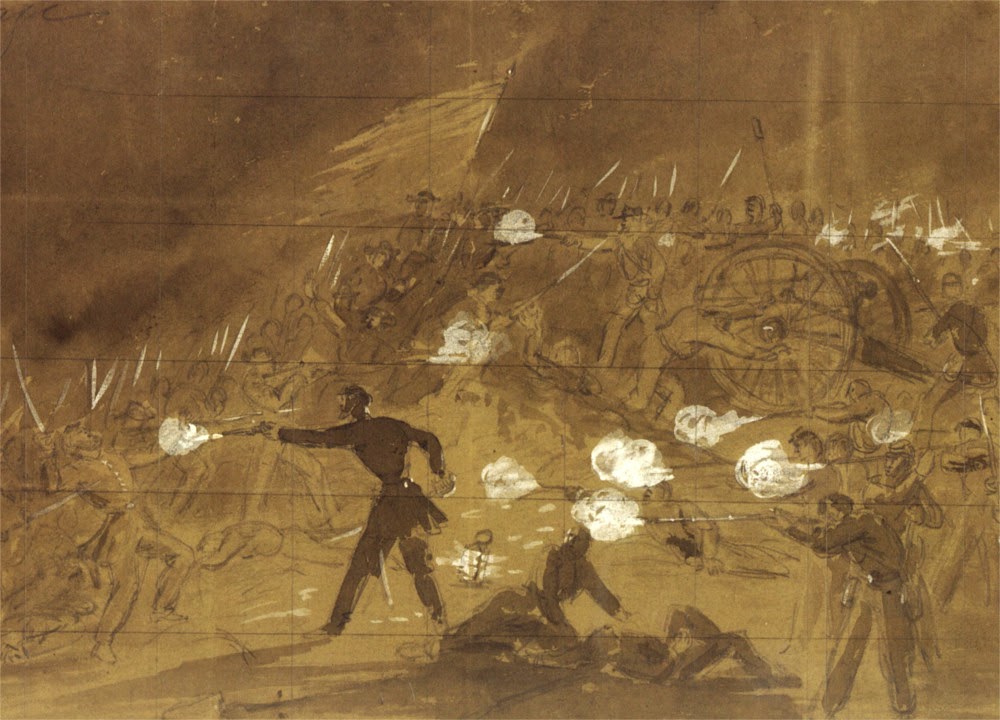 Nineteenth-century photography was too slow to cope with scenes like this famous moment from Gettysburg. (Alfred Waud, Attack of the Louisiana Tigers on a Battery of the 11th Corps, July 2, 1863, Detail) 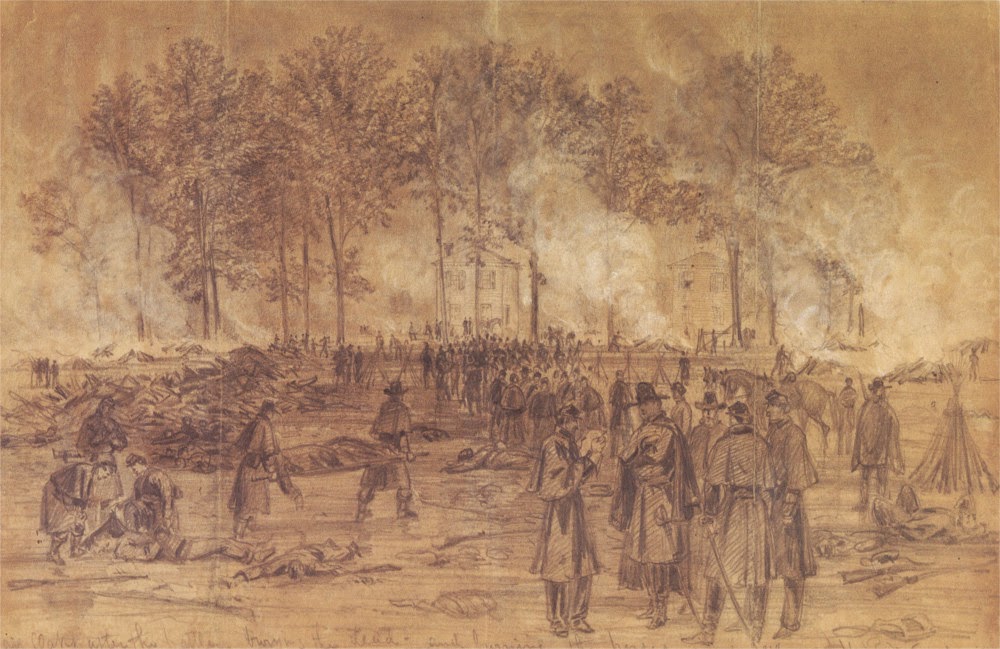 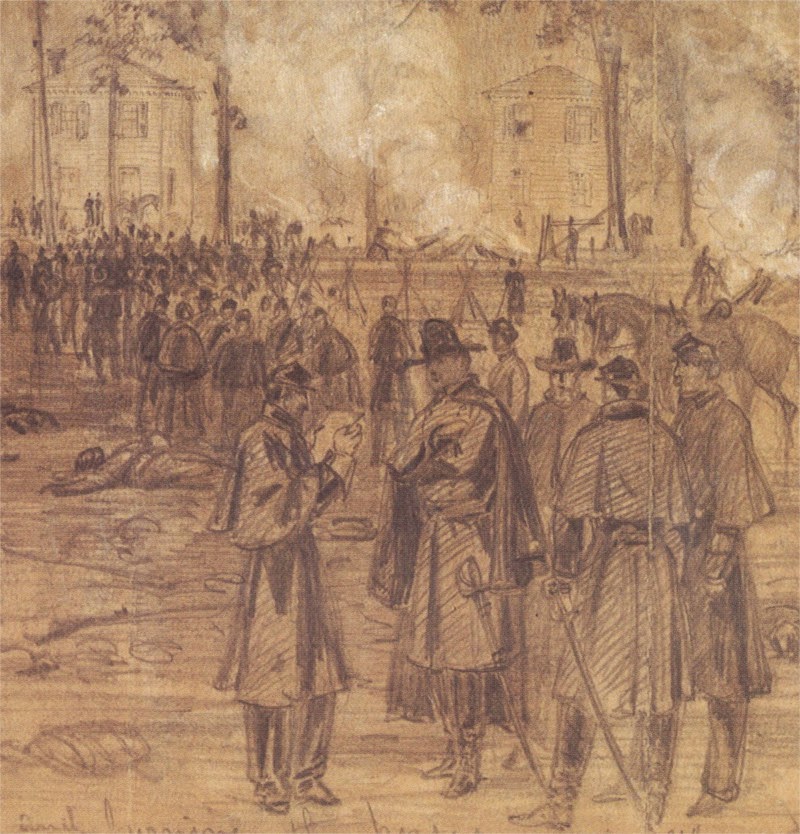 Arthur Waud, Burying the Dead after the Battle of Fair Oaks, June, 1862, and detail. 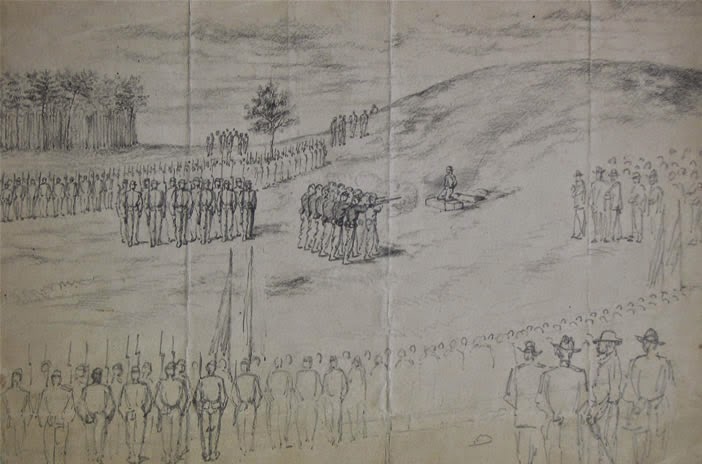 Edward Mullen, Execution of a Deserter. 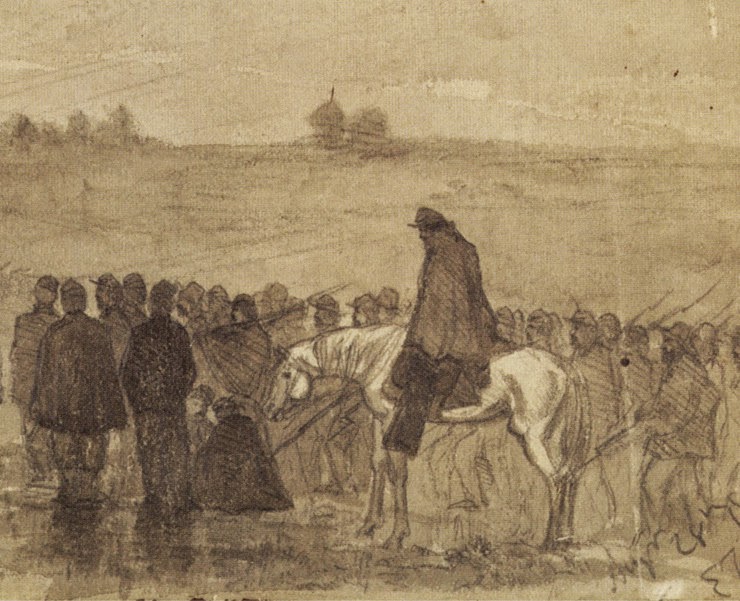