The Tale of the Fragrant Concubine, or, History Wars in Kashgar 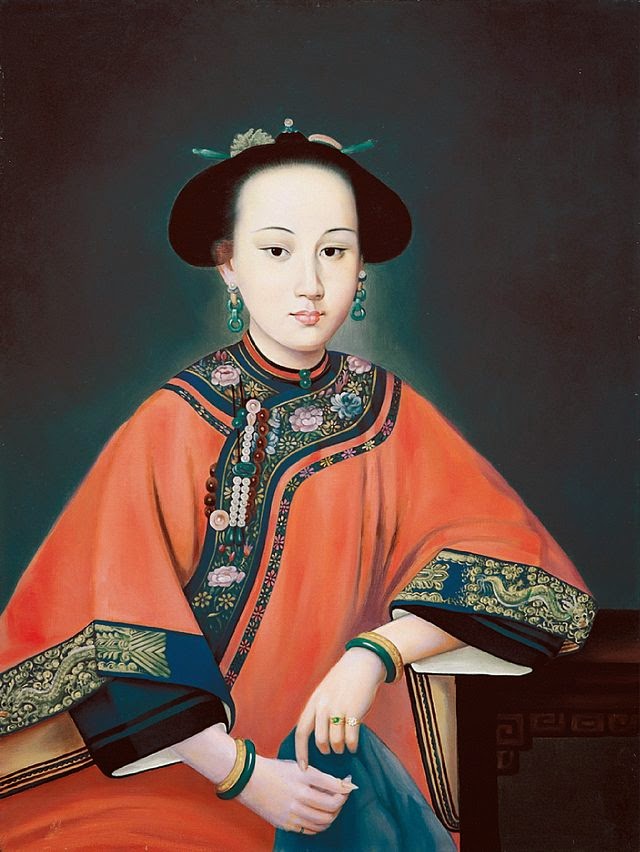 In Kashgar, western China, Andrew Jacobs stumbled across an old story that still has great resonance for both Chinese and Uighurs. The Chinese version of the story goes like this:


Although accounts vary as to some details, the basic story amongst Han Chinese recounts the discovery by the Qianlong Emperor of an Uyghur girl named Iparhan, granddaughter of Apak Khoja, a local leader in the oasis city of Kashgar. Even more remarkable than her beauty was the scent her body naturally produced; captivated, the Emperor sought her as an Imperial Consort for his harem. She was given as a gift to the Emperor and carefully escorted all the way to Beijing, washing every day along the road in camel's milk to preserve her mysterious fragrance.

Upon her arrival to the imperial palace, the Fragrant Concubine, was gifted with a garden and a luxurious room of her own as a sign of the Emperor's devotion. Homesick and distraught, she remained disconsolate as the Emperor made ever-increasing efforts to recreate her distant village, building her a mosque, miniature oasis, and bazaar outside her windows in an effort to bring her happiness. Finally she relented and came to love him when he sent messengers to Kashgar to return with an jujube tree bearing golden fruit, and the Fragrant Concubine became the emperor's cherished consort until her death. An enduring symbol of national unity and reconciliation, her body was brought back to her home of Kashgar, where she is now entombed, in a procession of 120 bearers in a journey that took over three years.

The portrait above, painted by Giuseppe Castiglione in 1760, is said by some Chinese scholars to be Iparhan, although others deny that the Rong Consort (her title) was the Uighur woman of the story. 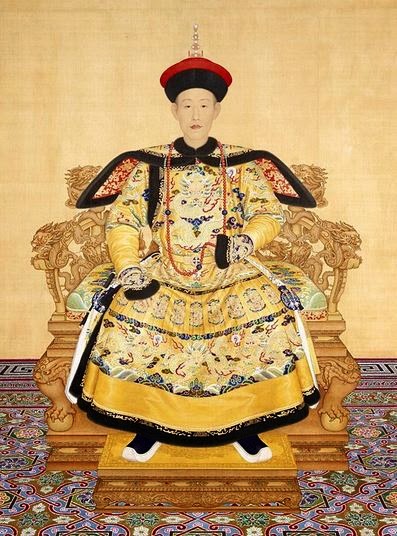 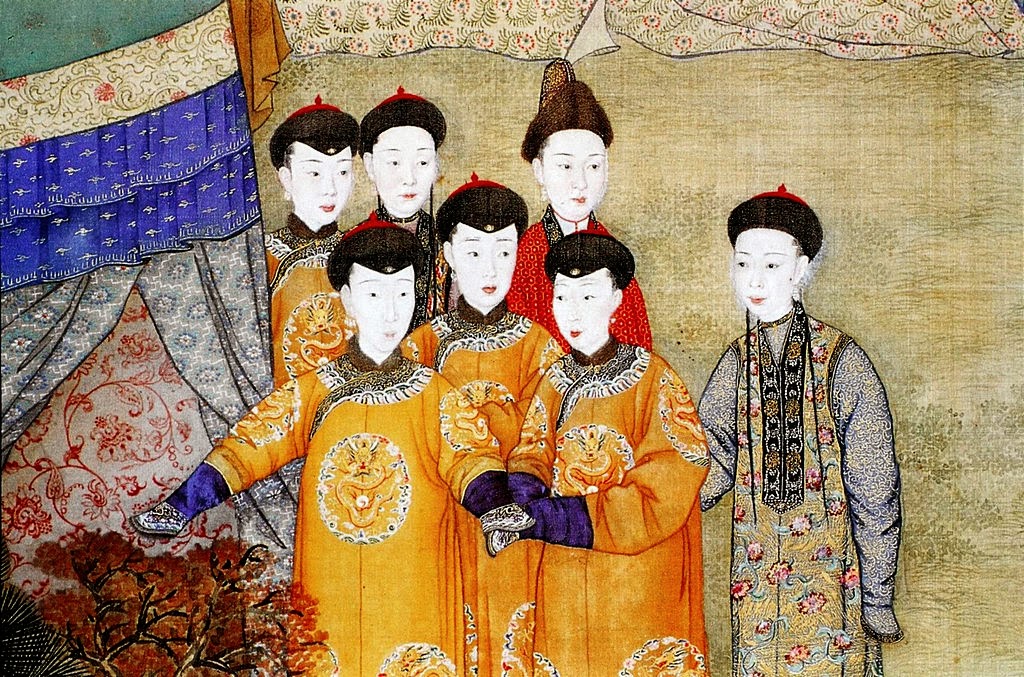 But the Uighurs also know this story, and their version goes like this:


Stolen from her husband, a Uyghur leader who had resisted the army of the Qing, and spirited away to Beijing, Iparhan armed herself with daggers up her sleeves, on guard against the hated advances of the Emperor. Some accounts suggest that in addition to maintaining her purity Iparhan planned to kill the Emperor in revenge for his conquest of her homeland in Xinjiang. The Emperor, besotted, could not resist the allure of her beauty, but in the end his mother the Empress Dowager had her murdered by loyal palace eunuchs.

This seems unlikely to me, since all accounts agree that Iparhan lived in Beijing for more than 20 years, presumably long enough for the emperor's fatal attraction (if such it was) to have worn a little thin. But thus is it told. 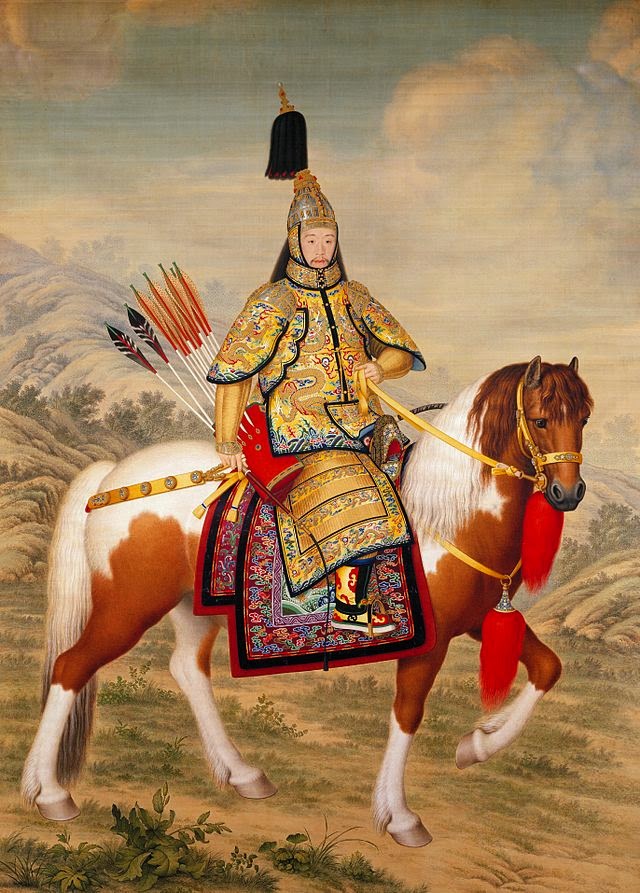 In the background to this love/revenge story was the aggressive military policy of the Qianlong Emperor, who attacked all of his neighbors at one time or another and extended his direct rule far into the desert west. That's him in the garb of a Manchu general above, quite a different sort of self-presentation from the usual Chinese imperial portrait. The position of a Uighur princess in all of this might indeed have been full of political intrigue and dynastic complications. 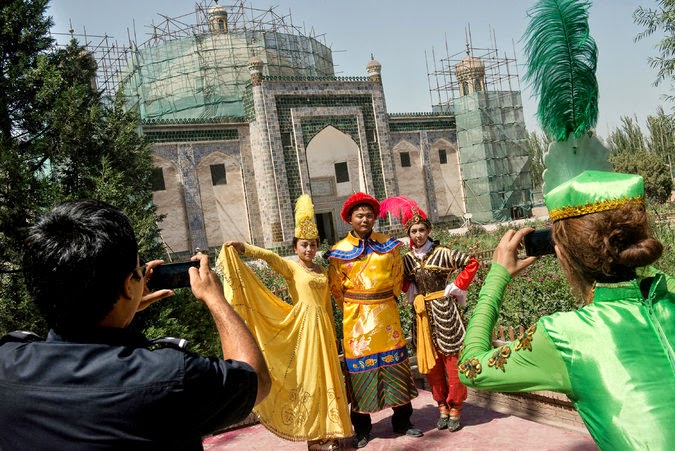 All of this is still relevant in China's desert borderlands, where Uighurs struggle over whether to assimilate more thoroughly into booming China or fight for greater independence. Busloads of Chinese tourists regularly arrive at the Muslim shrine where some people say Iparhan is buried; above, guides dressed as the Fragrant Concubine and other characters pose for photographs. Andrew Jacobs:


“The love between her and the Qianlong emperor was so strong, after she died, he sent 120 men to escort her body back here for burial,” one guide explained, eliciting nods and knowing smiles from the crowd. “It was a journey that took three years.”

But with the group out of earshot, a local resident offered up a starkly different version, describing Iparhan as a tragic figure, little more than a sex slave who was murdered by the emperor’s mother after she repeatedly rejected Qianlong’s advances.

“The story that most Chinese know is completely made up,” said the man, an ethnic Uighur, who asked that his name be withheld for fear of angering the authorities. “The truth is she isn’t even buried here.”

In the six decades since coming to power, China’s Communist Party has devoted enormous resources to composing historical narratives that seek to legitimize its rule and obfuscate its failures. . . . When it comes to China’s ethnic minorities, the party-run history machine is especially single-minded in its effort to promote story lines that portray Uighurs, Mongolians, Tibetans and other groups as contented members of an extended family whose traditional homelands have long been part of the Chinese nation.

And thus does a folktale about imperial infatuation become a symbol of modern ethnic strife.
Posted by John at 7:24 AM