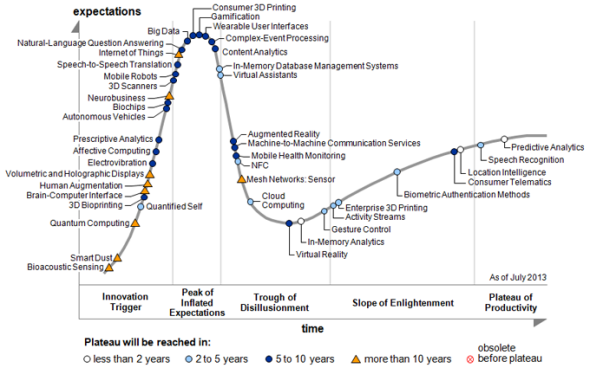 I just discovered that Jackie Fenn of internet research firm Gartner has attempted to quantify the "hype cycle" by which new tech ideas are invented, hyped to the skies, fall back to earth, and then gradually climb toward real usefulness or profitability. Above is the 2013 version of the chart, showing where various new technologies fall on the curve.

I would add that many much hyped new technologies never make it onto the useful part of the curve, but fall off along the way, and also that some, like AI, have gone up and down the hype mountain several times, perhaps spinning off modestly useful technologies along the way but never approaching their claimed potential.
Posted by John at 7:25 AM