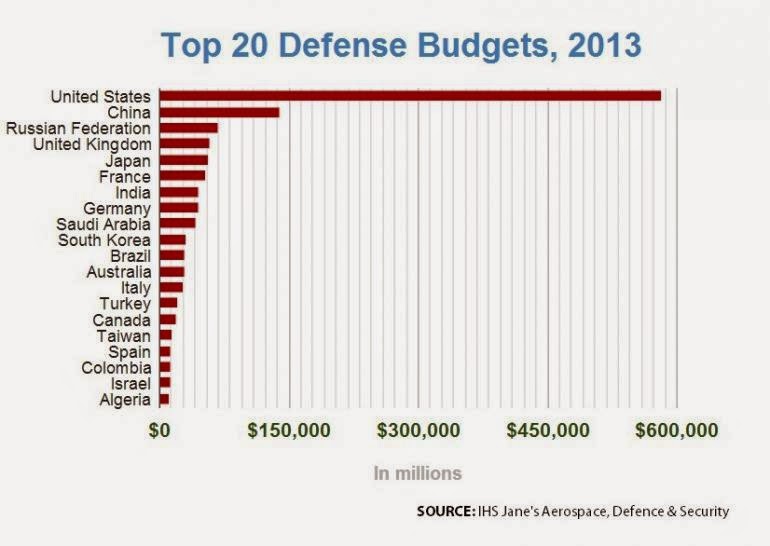 The chart above, which everybody has seen in different versions over the past few years, ought to be enough to convince everyone that our defense spending is too high. And yet the National Defense Panel, a bunch of retired generals and think tank types, has just released its annual report on America's military posture and finds our safety imperiled by budget cuts:


Since World War II, no matter which party has controlled the White House or Congress, America’s global military capability and commitment has been the strategic foundation undergirding our global leadership. Given that reality, the defense budget cuts mandated by the Budget Control Act (BCA) of 2011, coupled with the additional cuts and constraints on defense management under the law’s sequestration provision, constitute a serious strategic misstep on the part of the United States.

To that I can only ask: if our military can't defend us while spending more than the rest of the world's leading nations put together, what's wrong with them?
Posted by John at 12:23 PM

I've heard it said that the US military's overall strategic plan is to be able to simultaneously fight and WIN two different wars at the same time. Whether reality reflects that ambition I can't say, but it certainly tells volumes about the mindset of the people running the show.

The thing to remember about American military spending is that the system was built up to operate on Cold War standards - and by those standards, our spending makes sense. The USSR used to spend comparable amounts of money on their own military capabilities, because MAD was the only strategy deemed feasible in a world of nuclear brinksmanship. When the soviet system imploded, their spending plummeted, but ours has remained largely the same.

Part of the problem is that the US has a global military presence. America maintains many military bases all across the world, in countless countries, and maintaining this far flung network requires a lot of resources. Our mindset is still that of the 1980s where we justify obscene military spending by tauting the "strategic value" of our various holdings around the world - as if having bases in Europe and Southeast Asia was still in any way necessary or reasonable.

And even if we get away from that logical fallacy - even if we realize that there is no longer a rational reason to maintain a global military presence in the absence of impending nuclear war - we still run into the problem of figuring out how to dismantle a war machine which was specifically built to be as efficient, enduring, and self-sufficient as possible.

Gallup Polls show that of all societal institutions, the military is the single most trusted among American citizenry - far and away more than our legal and judicial systems, our economic systems, our education systems, and even our religious systems.

Americans love and trust the military more than any other institution, and they hate the idea of reducing military spending. "Support our Troops" is a powerful rallying cry against any budget cuts, no matter how sane. Countless young people and their families rely on the military to make basic ends meet, or to have even a chance at higher education, or a chance at ever being able to retire.

For these people, downsizing the military is a scary concept, as they see reductions in military spending as a direct threat to their livelihoods.

In reality, the vast majority of military costs are actually in equipment. The cost of a single F-22 fighter jet could pay the average total yearly comepensation of a US soldier over 1,515 times.

(Of course, 60% of a US soldier's "compensation" comes in forms other than actual wages, including things like housing and food. If we look strictly at pay, a single F-22 pays the yearly wages of 5,105 "average" soldiers. And if we compare to the cost of the F-22's development program, we could pay the wages of 2,270,251 "average" soldiers - which 40,000 odd more than our Active and Reserve military forces combined.

But the fears of soldiers and their families might not be that misplaced - the military industrial complex thrives on government contracts and bacon, and it might make more sense to the top brass to simply cut benefits and field fewer soldiers than it would to trim back spending on military equipment and technological development.

Yes, it isn't just the military, it's the whole political establishment, for example those Congressmen who just assume we could force Iran to accept our notion of an acceptable nuclear program. Some of the global capacity may be necessary, or at least very useful; I have read that British troops deployed to Afghanistan depended on American logistical support, because only we have enough planes and ships to supply a fighting force on the other side of the world. I would like to give up the pretensions of global power and drastically rein in the military, but I understand that isn't going to happen, so I push for minor changes and cutbacks where feasible.

But in the long run the way to reduce US military spending is to stop fighting wars. That is the key.