In Which the Usefulness of Sons is Demonstrated 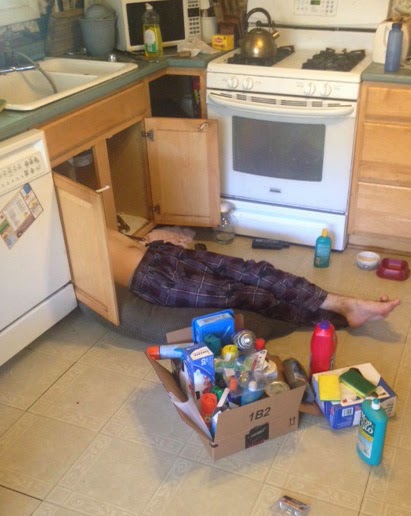 Our sink was leaking very badly -- actually "flowing" is probably a better verb for what it was doing. I isolated the problem to the faucet and began trying to remove it. But we have a garbage disposal and the space under the sink is very crowded, and I found it utterly miserable to squeeze myself into the tiny space and twist my arms into the pretzel necessary to get pliers on the bolts at the correct angles. As I was cursing my fate, my elder son chose to rouse himself from slumber -- this was 1:45 in the afternoon -- and wander into the kitchen. "Would you like to learn some plumbing?" I asked innocently. "Sure," he said. So I pointed to the bolts that had to be undone, handed him the pliers and fled. Since he had never done any plumbing at all before, my hopes were not that high. But ten minutes later he emerged from the kitchen with the old rusty faucet in his hand, saying, "Got it."

The future is in good hands? Being relaxed is the key to all minor household repairs. Did you get him some of whatever he's into in return?

We bought a new faucet and I paid him to install it. He did fine except that I had to remind him twice to check the instructions. So, yes, he got what he wanted out of it.