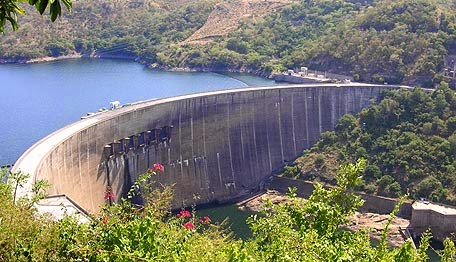 Huge hydroelectric dams are not cost-effective and we should stop building them. The projected costs of the biggest contemporary dams run into the tens of billions, but even those numbers are inadequate; the average big dam costs 44% more than projected. The money borrowed to build huge dams became a terrible financial burden on Mexico, Turkey, Brazil and other places, partly because of currency fluctuations. And that's before we get into the social cost of uprooting tens of thousands of people from fertile riverbanks and moving them to dry land. Consider the 57,000 Tonga people relocated in 1956 to build a dam on the Zambezi River between Zimbabwe and Zambia:


Construction of the Kariba Dam, which relied on what was then the largest loan in the World Bank’s history, required the Tonga to move from their ancestral homes along the Zambezi River to infertile land downstream. Mr. Scudder has been tracking their disintegration ever since.

Once cohesive and self-sufficient, the Tonga are troubled by intermittent hunger, rampant alcoholism and astronomical unemployment. Desperate for income, some have resorted to illegal drug cultivation and smuggling, elephant poaching, pimping and prostitution. Villagers still lack electricity.

Dams are built because the costs are systematically undercounted and the benefits oversold. (What happened to the electricity the Tonga were promised back in 1956?) International development gurus have been fixated for too long on mega-projects that are supposed to “jump start” the economies of developing nations, but all our experience is that they rarely do. Huge projects like dams or steel mills simply do not generate the broad ripples that their designers envisage. Many small investments, broadly distributed, always work better. Plus, there are now better ways to produce electricity than huge dams:


Instead of building enormous, one-of-a-kind edifices like large dams, the study’s authors recommend “agile energy alternatives” like wind, solar and mini-hydropower facilities. “We’re stuck in a 1950s mode where everything was done in a very bespoke, manual way. . . . We need things that are more easily standardized, things that fit inside a container and can be easily transported.”

The biggest dams look so seductive, so dazzling, that it has taken us generations to notice: They’re brute-force, Industrial Age artifacts that rarely deliver what they promise.