Bobby Jindal is Making a Fool of Himself 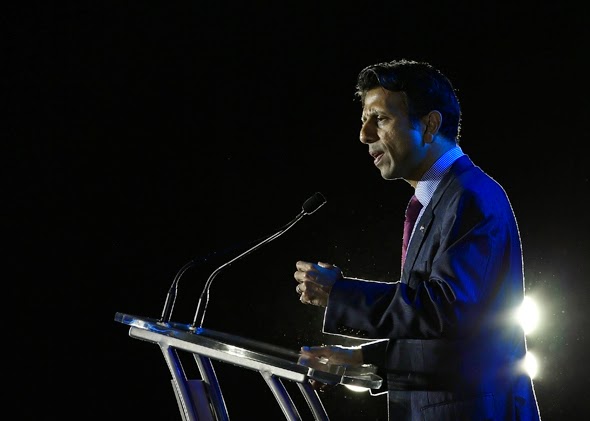 Bobby Jindal has acquired a bad case of what we might call Romney Syndrome, the determination to become President at any cost. His latest stunt is suing the Education Department over the Common Core education reform scheme. This is rich because 1) back when Common Core was popular with conservatives, Jindal was a big supporter, and 2) Jindal has so far been unable to get his own state to give up on its version of Common Core. He has just decided that grandstanding against Common Core will help make him the conservative champion in the primaries, so away he goes.

I find Jindal ridiculous. He has alienated many of his friends in Louisiana by taking stand after stand that has nothing to do with the actual politics of Louisiana and everything to do with his own vision of the 2016 nomination contest. He is hardly the first governor to arrange his time in office as a resume-building exercise, but he is just so crass and obvious about it. He flaunts both his ambition and his emptiness. My favorite example was when Jindal gave a speech to the Republican National Committee and said that Republicans "can't afford to be the stupid party," then went on to embrace all of the positions that led pundits to drag out the "stupid party" label in the first place. (Viz., he said Republicans should not be the party of austerity, then called for a balanced budget.)

I don't really expect very much of politicians. But shouldn't a candidate for President have something to offer beyond the recitation of slogans and relentless catering to the whims of the party base? I hate Ted Cruz but I do believe he means much of what he says. After his epic battle with Wisconsin's unions, I think everybody knows where Scott Walker is coming from. Marco Rubio may be an empty suit, but at least he is handsome and stylish and seems well-informed about important issues. Rand Paul may have shed his most extreme and interesting positions as he gets ready to run, but I still think he would govern very differently from the other candidates. What does Jindal have to offer? The more he talks, the smaller and less significant he seems.
Posted by John at 8:05 AM