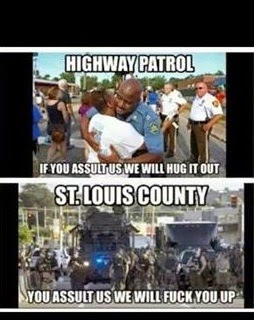 Dave Weigel passes along this charming photograph, which has been making the rounds of conservative Facebook groups. It brings to the fore the basic mindset that underlies so much of what humans do wrong, our habit of dividing the world into US and THEM, making THEM into enemies and then wanting not just to defeat but to humiliate those enemies. Lost here is any notion that the people of Ferguson are our fellow citizens, our fellow human beings.

Then again maybe it just means that some people prefer fighting to hugging, especially when they feel assulted.

In opposition to this sort of thing I suggest the following, from our most eloquent President:


Do I not destroy my enemies when I make them my friends?

I was hopeful when they brought in the Highway Patrol and pulled out everyone else and we had a solid, day-long period of de-tensioning in which things looked like they might be reversing.

I was relieved at what seemed to me to be the results of someone higher up in the food-chain of jurisdiction and authority making some angry phone calls and threatening some pensions to get the insane crack-down response lifted and replaced with a less inflamatory, more highly ameliatory solution. It seemed like a brilliant stroke of conflict resolution to bring in a sympathetic African-American officer from a separate police force who could act as a community liason and help bring things down from an intense boil to more of a patient simmering. I desperately wanted to believe that sanity had decended at last, and that the issue would be handled with comparable calm over the next few days and coming weeks while the behind-the-scenes workings of the various institutions involved both directly and indirectly chugged away at handling the overall situation vis-a-vis ensuring that a full investigation and court case got carried out publicly.

But it didn't last. The very next day, the macho thugs with assault rifles were back in action, ready to yell and curse and fire CS gas at the crowds of protesters, and to arrest journalists for documenting it all.

The police response has been baffling and demoralizing, but what's even worse is that the community response has descended into unfocused rage, with little chance of any productive discourse being possible. "Fuck The Police" is the buzzphrase seemingly on everyone's lips, and public outrage has slipped from legitimate condemnation of police abuses into the realm of irrational spewing of vitriol just for the sake of spite. The cause of combatting social injustices via legitimate demands for actual reform is being trampled by a mood of nihilistic madness and a thirst for vengeance and general hatred. There are too many misguided people chanting "Tear the system down!" for those who want to merely fix it instead to be heard.

So we've got protesting crossing the line into rioting and looting. We've got people calling for justice for a slain teenager mixed with people who are perpetrating their own injustices. We've got violent agitators attacking the police and at least one case of suicide-by-cop, and we've even seen people forming human chains to protect police officers from those who are trying to provoke them into further senseless bloodshed.

People desperately want things to change - the problem is some want to change the world with gunfire and chaos. Add to that the bumbling of an inept governor and a hyper-militarized police force that surely must be feeling threatened on all sides, and I'm somewhat surprised and eternally grateful that there has been more violence yet. But there's still a long road ahead before we get out of the woods, and people are dropping lit matches left and right in the middle of a drought. At some point, odds are good something is gonna catch and the whole thing is gonna go up in smoke unless we can defuse the situation.

...eternally grateful that there hasn't been more violence yet