This weekend European voters finally rejected the stupid economic policies that have mired the continent in a deep recession. The French have elected a new socialist President, Francois Hollande, who has promised to focus on economic growth rather than deficit reduction, the Greeks have abandoned their centrist parties and the humiliating bailout deal they reached with the EU, and conservatives in Britain and Germany were defeated in local elections.

To respond to a collapse in consumer demand with cuts in government spending feels morally right to some of us -- in hard times, we all have to tighten our belts -- but it is economic idiocy. In such times, governments need to increase their spending. In places where interest rates have soared, such as Greece and Spain, this can be difficult. Those nations are in a bind from which they can only be rescued by either massive EU help, or abandoning the Euro. But in the U.S., Britain, and France, which can borrow money cheaply, to refuse to do out of some misplaced fear of debt is crazy and cruel. In Britain, the conservative government's austerity plan has driven them back into recession, and since this has reduced tax revenues, their spending cuts are not even doing much to bring down the deficit. 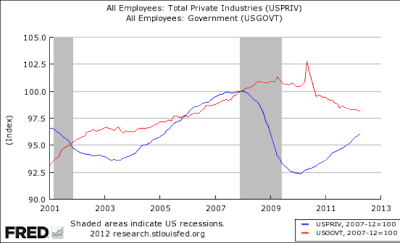 If you want to know why recovery from this recession in the U.S. has been so slow, look at government spending. As you can see from this graph, private employment has been rebounding nicely from its trough. But government employment has continued to fall, dragging the whole economy down with it. (The little peak was census hiring.) Look back to the previous recession, in 2001, and you see that it was growing government employment as much as anything else that brought us out. By refusing to borrow more money, at a time when the real interest rate on U.S. government bonds is less than zero, we are condemning ourselves to years of high unemployment.

The root cause of our problem with deficits has nothing to do with Obama, it was an inheritance from George W. Bush. The government ought to run a surplus during the best times so that we have the resources to handle recessions. But thanks to Bush's fiscally disastrous combination of multiple wars and huge tax cuts, we entered this recession with a huge and growing debt. Thus the surge of debt created by the recession -- mainly falling tax revenues, but also the stimulus spending -- raised the deficit to scary levels. This, plus generalized anger at government failings, brought Republicans control of the House, which they have used to fight for ever tighter fiscal policies.

Obama needs to make the case that only government spending can make the economy grow quickly. Because of the urge toward belt tightening and the suspicion that governments were equal partners in creating this crisis, that is not going to be easy. But the case has been made in Europe, so it can be done.
Posted by John at 7:46 AM