Moai, or, the Statues of Easter Island 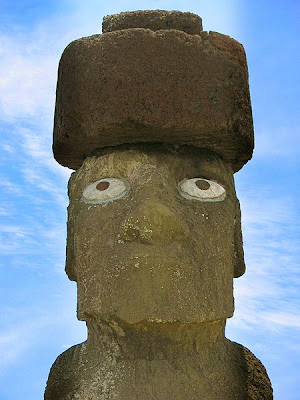 A great deal of work has been done in the past few decades on the famous statues of Easter Island. For one thing, some archaeologists now think that all the statues once had eyes made of white coral, with obsidian or red scoria pupils. They discovered this by reassembling the many small fragments of white coral found around the statue sites. Of course, since this is archaeology we are talking about, other experts think this is bunk. But here is a statue with reconstructed eyes, and its red stone top knot back in place. 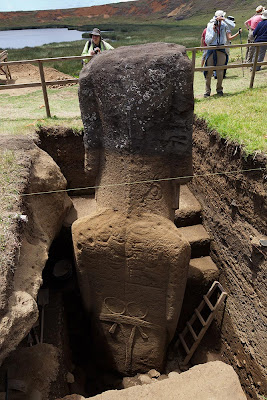 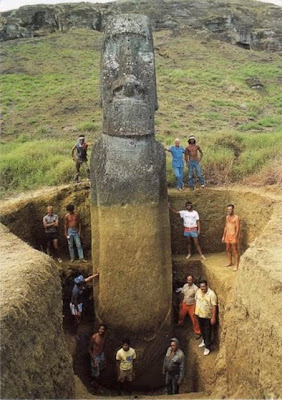 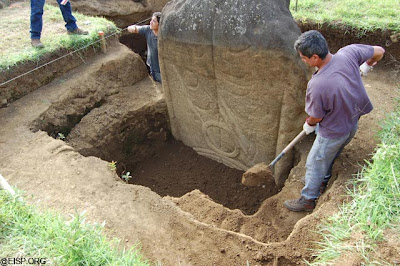 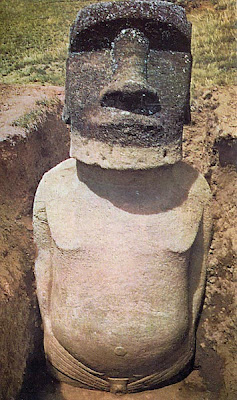 Most people think of the statues as mostly head, but actually they all have or once had bodies; the typical ratio is 3 parts head to 5 parts body. The stone of which the statues are made weathers easily, so the exposed bodies have lost all their detail. Excavation of buried examples, protected from rain and wind, shows that many are carefully carved. Some of the designs match the tattoos still worn by many islanders. Incidentally, the burial of some of these seems to have been intentional, leaving us to wonder why they carved these details and then covered them over with earth. Given how little we know about the statues, though, that hardly seems surprising. These pictures from the Easter Island Statues Group, which has been excavating around the statues for five years now. 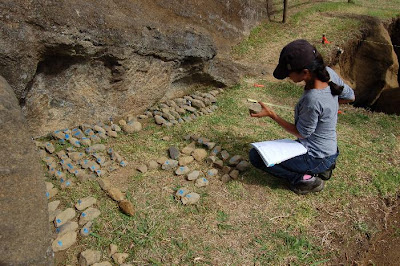 Controversy rages over what happened to the civilization that erected the statues. Did they create their own ecological catastrophe by cutting down all the island's trees and wiping out its native species? Or did they trundle along ok until Europeans arrived with goats and influenza? Even the date over the islanders' arrival is now in dispute. This has attracted a battalion of archaeologists to the islands, and better answers should be forthcoming sometime before I retire. (Above, stone tools known as toki from an Easter Island dig.)
Posted by John at 8:37 PM