A Trip to the Walters Museum 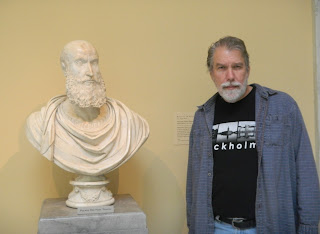 I went with my elder daughter to the Walters Museum today, her first trip. We moved at speed through several galleries, not lingering long over anything, and it was a fun way to tour the sweep of western art history. 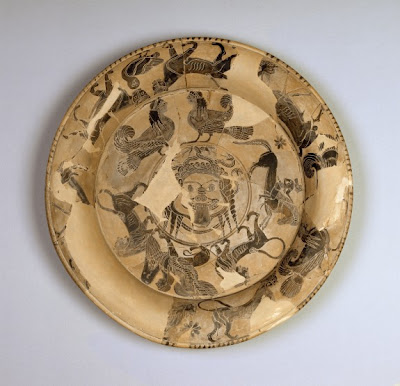 We skipped the Egyptians and started with Archaic Greece. 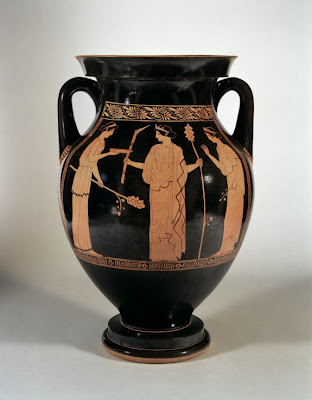 Moving on through the classical rooms. These women, from about 450 BCE, are getting ready for the rites of Dionysus, in which they would psyche themselves up to the point that they could kill a goat with their bare hands and tear it apart. I love telling my students that. Then to their nice little collection of Roman portrait busts, like this one from the third century AD. Don't you feel like you've met this guy? 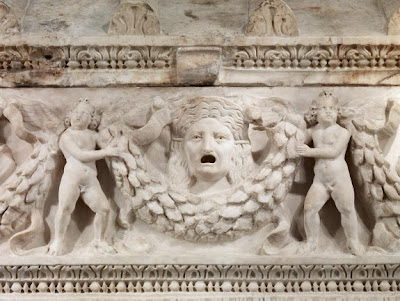 They have several fine Roman sarcophagi, of which this, the Garland Sarcophagus, was my favorite. That central face is truly creepy. 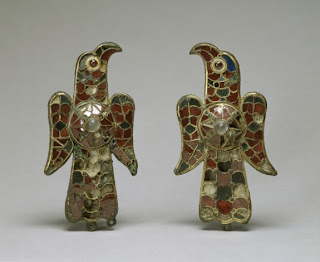 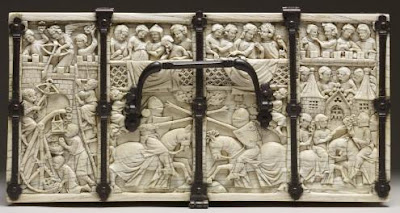 And a wide assortment of high medieval art. This charming little casket was probably my favorite item. To the left of the jousting knights you can see other amorous men assaulting the Castle of Love. 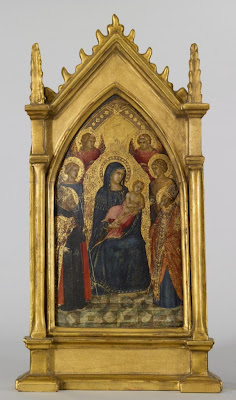 Then you enter the era in which the divine light was represented as gold. 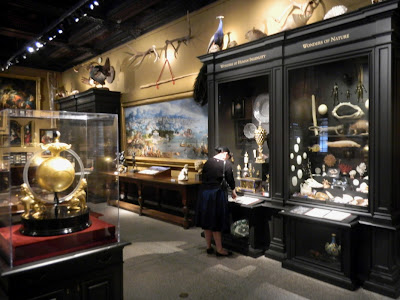 They have set up their 17th-Century Dutch paintings in a large room meant to recreate the sort of rich merchant's house where the paintings would originally have been displayed. Besides the paintings, they had several cabinets of curiosities filled with things like mineral samples, fossils, skeletons of tropical animals, snake skins, objects of Indonesian and African art, and so on. It is a terrific presentation and we both enjoyed it very much. 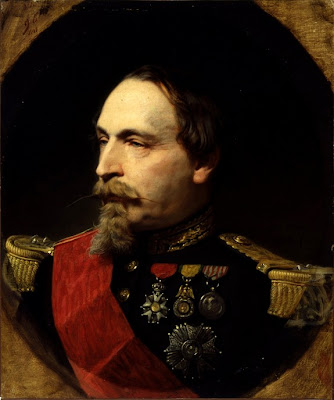 Lots of fine nineteenth-century paintings; I love this portrait of Napoleon III by Adolph Yvon, 1868. It was amusing to watch my daughter run through the Impressionist room; everybody hates something, I guess, and she hates the Impressionists. 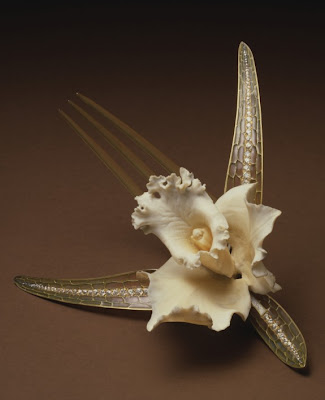 And on to rooms of fin-de-siecle treasures, like this comb by Art Nouveau designer Rene Lalique, from 1904. My daughter liked this a lot. 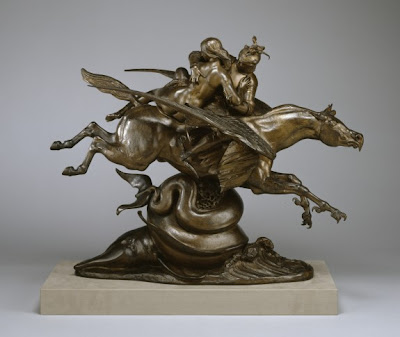 I ended up on this trip wondering about how this collection came to be. Most of it was bought by William and Henry Walters, father and son. The father specialized in nineteenth-century art, mainly paintings, with a sideline in Chinese ceramics. The son bought everything, from ancient Egypt to contemporary Japan, and he was as interested in little geegaws as in big works. He bought thousands of Babylonian cylinder seals, Roman gems, fragments of medieval architecture, Baroque clocks, you name it. Much of the stuff on display is mediocre, especially the Renaissance and Medieval paintings, as if Walters just bought everything he could whether it was all that good or not.  It boggles the mind that any man could have managed to buy so many objects in one lifetime. I don't mean the cost, I mean the sheer work of finding these objects, writing the checks, and sending them home. Or even enjoying them; could he really have appreciated half the stuff he bought? Well, whatever, they are all now in Baltimore, where admission is free and they can be enjoyed by everyone.
Posted by John at 7:16 PM

THE WALTERS. Is one of my favorite museums! I go there about once a week during my lunch break. To me, it's like having a wealthy, eccentric relative who lets you rummage around in his study when he's away - as you pointed out, not so much the very best of everything, but taken all together, it's a really fun museum.