Hildegard of Bingen is Made a Saint 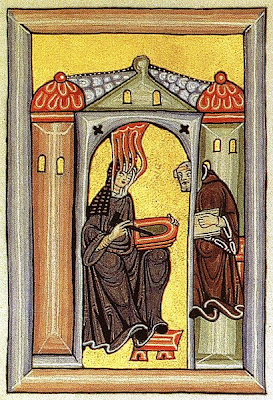 Though she has been venerated for centuries, Hildegard of Bingen (1098-1179) was never officially made a saint until this week. Her canonization was carried through by Pope Benedict XVI, who is a great admirer of Hildegard and regularly cites her writings:


Despite having been considered a saint for centuries, the visionary abbess's sainthood had never been officially recognized. It befell to Benedict, who is rumored to have plans to make her a "Doctor of the church," to set things straight. It would be hard to overstate Hildegard's influence on the German-born pope, who has repeatedly turned to her writings and prophecies to explain his vision in the most difficult moments of his pontificate.

In December 2010, he quoted a long passage from one of Hildegard's visions to assess the damage done to the church by the sex abuse scandal, and to invite the Vatican hierarchy to accept this "humiliation" as an "an exhortation to truth and a call to renewal."

"In the vision of St. Hildegard, the face of the church is stained with dust. ... Her garment is torn -- by the sins of priests. The way she saw and expressed it is the way we have experienced it this year," he said.

A few months earlier, he had referred to Hildegard to address calls for reform inside the church, sparked by the "abuses of the clergy." Benedict recalled how the saint had "harshly reprimanded" those who in her lifetime wanted "radical reform," reminding them that "true renewal" comes from "repentance" and "conversion, rather than with a change of structures."

What makes Benedict's admiration for Hildegard especially interesting is that Hildegard is the medieval figure most beloved of modern feminists. Her omnipresence in introductory medieval studies classes has become something of a joke, but people like me keep assigning her. I find her to be by far the most accessible of the visionary saints, as well as one of the best poets of the age and one of the most interesting composers. Besides, as a fellow migraine sufferer, I always empathized with her.

That the ultra-conservative Benedict admires Hildegard as much as the Berkeley women's studies department says something important about the difficulty of applying modern categories to the Middle Ages. Was Hildegard a feminist? What would that even mean?

Hildegard was a nun and was elected abbess of an important German monastery, apparently because she was very popular; she is almost the only important medieval religious figure who seems like a nice and decent person. She became famous because of her visions. (You will never get medieval society or understand the career of someone like Joan of Arc if you don't recognize that many medieval people took religious visions very seriously.) She experienced visions throughout her life but, in perfect shamanistic fashion, never wrote them down or told them to others until she was nearly killed by a severe illness. When she recovered from this crisis, she published her visions and circulated them throughout the monasteries of the Rhineland. She also wrote musical works, which were initially performed by choirs of nuns for audiences of other nuns. Some of her poetic works have a pronounced feminine tone:

Alleluia! light
burst from your untouched
womb like a flower
on the farther side
of death. The world-tree
is blossoming. Two
realms become one.

Besides being an author of works intended mainly for other women, and which take what can be seen as a women's perspective, she also had an important public career. Because of her fame as a prophetess she was able to write admonishing letters to many public figures, calling on them to repent their sins, put aside their quarrels and honor the church. Thus her high standing with feminists.

On the other hand, she absolutely accepted that as a woman and a nun she was subject to the authority of male church leaders. The political letters she wrote were in service of church orthodoxy and the power of the papacy. The sins she thought stained the clothes of the priesthood included accepting that the emperor, not the pope, was the political head of Christendom, and softness toward Cathars and other heretics. She certainly did not challenge the patriarchal family life of her time or do anything to advance the status of women who did not experience divine visions. So she is a perfectly acceptable figure for Benedict, the most reactionary pope in a century.

Set aside such categories: she was a woman of another time, with different concerns from ours; she was a nun devoted to the church and to spiritual life; she was a visionary poet who translated her experience of revelation into words.

Loving tenderness abounds for all
from the darkest
to the most eminent one beyond the stars,

Exquisitely loving all
she bequeaths the kiss of peace
upon the ultimate King.