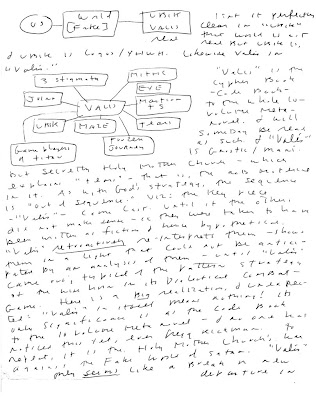 Science fiction writer Philip K. Dick considered himself a prophet. His stories, he thought -- Blade Runner, Total Recall, Minority Report, The Adjustment Bureau -- might be set in the real future, to which he had access through his visions. Simon Critchley has a series of articles at the Times web site on Dick's theology that I find fascinating. It strikes me that in one way Dick was a prophet, because his paranoid view of the universe seems to explain much of what has happened in our popular culture over the past 40 years.

Dick's spiritual arc began with an event that his followers call "the golden fish":


On Feb. 20, 1974, Dick was hit with the force of an extraordinary revelation after a visit to the dentist for an impacted wisdom tooth for which he had received a dose of sodium pentothal. A young woman delivered a bottle of Darvon tablets to his apartment in Fullerton, Calif. She was wearing a necklace with the pendant of a golden fish, an ancient Christian symbol that had been adopted by the Jesus counterculture movement of the late 1960s. The fish pendant, on Dick’s account, began to emit a golden ray of light, and Dick suddenly experienced what he called, with a nod to Plato, anamnesis: the recollection or total recall of the entire sum of knowledge.

Over the following decade, Dick had many more visions, and he tried to understand them better by writing about them. Eventually he covered 8,000 pages with exposition, diagrams, and notes, a sample of which was finally published last year.

Dick was a gnostic of the dualist school. He believed that this world was created, not by a good god, but by an evil being who intended for us to suffer. Like the ancient gnostics, he thought that through understanding, gnosis, our souls could escape from the trap of this physical universe and return to the purely spiritual world where they belonged. As Critchley puts it,


Gnosticism declares a radical dualism between the false God who created this world – who is usually called the “demiurge” – and the true God who is unknown and alien to this world. . . . for the Gnostic, evil is substantial and its evidence is the world.

Dick modernized this old idea in interesting ways. First, he posited that despite the machinations of the demiurge, the true god did manifest himself to the trapped souls of our world. Dick thought he had reached the true godhead in his visions. He also thought the actions of the true god could be perceived through some things about our world, especially the laws of nature and patterns in the flow of information. "Information" sometimes appears in Dick's work as a sort of divine messenger, bringing us the truth about the universe beyond our material prison. Dick believed that time as we perceived it was an illusion of the demiurge, and that the future and the past all existed simultaneously, which is why he thought he could see the future in his visions or gain understanding of it through the information flow.

Dick's theology also had a strong political emphasis. He believed that the political powers of our world are the slaves or agents of the dark power. He called political power The Empire, and he believed that to accept the earthly power of governments and corporations was equivalent to worshiping the dark god who created our prison. The truth he gained in his vision included both the understanding that this world was made by an evil god as a prison for our souls, and the knowledge that all the political and economic powers we acknowledge are only agents of the dark god -- which explains why they try to oppress us and keep us ignorant and miserable. The Empire is only a manifestation of the Black Iron Prison that is this world.

I ask you, does not this vision underlie a vast swath of our contemporary culture? The sense that corporations and governments together comprise some sort of Empire bent on frustrating and enslaving us runs through our politics from the anarchists to the Tea Party to Occupy Wall Street. All true political believers have a gnostic, theological vision of the part that ignorance plays in keeping most of us enslaved, and the way that their "Truth" has liberated their minds. These are not just political ideas, but parts of an overarching vision of the universe in which the other side appears as the agents of a mysterious dark power. Dick's notion that the flow of information, properly understood, could give us access to hidden truths seems like a credo for the Internet age. The hero of The Matrix, the most explicitly gnostic film of our time, starts as a hacker, and his first hints about the truth come through his computer screen. Critchley says that the "dominant mode of understanding of fiction in our time" is


the idea that reality is a pernicious illusion, a repressive and authoritarian matrix generated in a dream factory we need to tear down in order to see things aright and have access to the truth. And let’s be honest: it is simply immensely pleasurable to give oneself over to the idea that one has torn aside the veil of illusion and seen the truth — “I am one of the elect, one of the few in the know, in the gnosis."

I don't mean to say that Dick invented any of this. Like most prophets, he only gave expression to the spirit of his age. The fear of secret societies and their machinations is an ancient one, and the notion that the high priests of our civil religion are really agents of evil is just as old. Dick updated these ideas with his vision of the dystopian future, attacking the modern age at its point of supposed strength: progress toward a better world. No, he said, this world is too firmly in the grip of dark powers and their minions for progress to mean anything but more efficiently monitored slavery. Only the few, those with true insight and great courage, can hope for anything better.
Posted by John at 8:40 AM