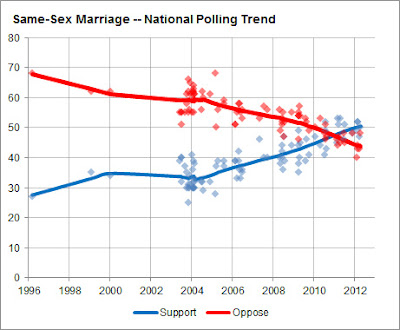 Today our President gave a clear endorsement to marriage for same-sex couples. Two weeks ago this would have surprised me, but after all the statements and retractions made over the past week by various administration figures, I think he ended up with no choice. To continue talking about "evolution" would have looked weak and vacillating, and the people who really hate gay marriage are all against him anyway.

As usual, Obama is leading from behind on this. As the graph shows, support for gay marriage has risen to around 50 percent in America, and it seems set to rise further. Support among people under 30 is overwhelming.

Obviously I think this is great, and I am proud of the man. But the really amazing thing is how fast attitudes about homosexuality have changed across the western world. Andrew Sullivan's in box is full of emails from people who remember thinking, 20 or 30 years ago, that Americans would never accept even Civil Unions for gays, and who find themselves astonished by the transformation we have experienced.

This happened because gay people began to live openly as gay and to tell their friends, families, and co-workers about who they were. Confronted with the evidence that many people they loved or at least got along with were gay, and the complete absence of social collapse that this created, people changed their minds. And that has been glorious to watch.
Posted by John at 9:13 PM