The Medieval Bronze Doors of the Basilica of San Zeno, Verona

I have a thing for medieval doors, from the simplest plank constructions to the wonderful art works installed on some cathedrals. Here is one of the most famous, from the Basilica of San Zeno in Verona, Italy. This is the North Panel. 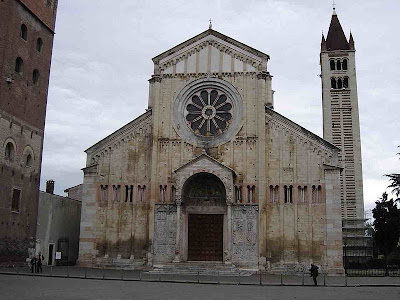 The basilica was first constructed in the 10th century, but it was completely rebuilt after an earthquake in 1117. The oldest above-ground parts of the current structure were finished by 1138 when the church was rededicated, but it remained under construction until 1398.

The bronze plates on the doors were made over a long period of time, by several different masters working in different styles. The oldest are believed to have been made by the Saxon masters of Hildesheim in the 11th century, and therefore predate the building of which they are now part. This is the South Panel.