The World Record Snakehead, or, the Fun Way to Control Invasive Species 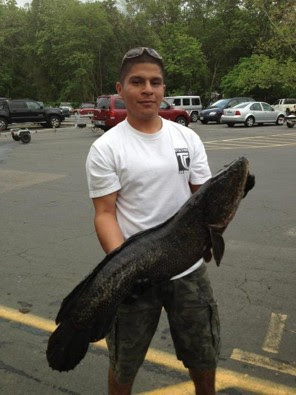 Juan Duran of Arlington, Virginia, holds the 18 lb, 4 oz. (8.3 kg) northern snakehead he caught in the Occoquan River last month. This appears to be a world record, which is a little ominous, considering that the snakehead is an invasive species from China that has only lived in the Potomac for about twenty years.

Which makes me think that the best way to control invasive species is to get people to eat them. Think of all the species that we have fished near to extinction once they became restaurant mainstays. According to Duran, snakehead taste great, as fried sandwiches or on fish burritos. So, if you want to help the Potomac River, go fishing for snakehead today.
Posted by John at 7:54 AM

I think they tried that with Nutria in Louisiana, but fried giant rat just didn't go over well.