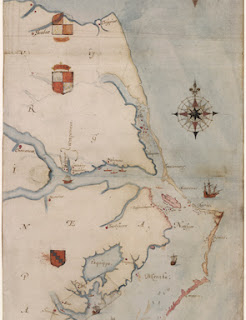 John White was the leader of the expedition that ended up being the Lost Colony. His 1587 map of Virginia and the Carolinas has two patches in it, places where a small piece of paper was glued over the map. The experts think these date to the time when the map was first made. One of the patches covers a misdrawn piece of the shoreline, with a more accurate rendering drawn over top. 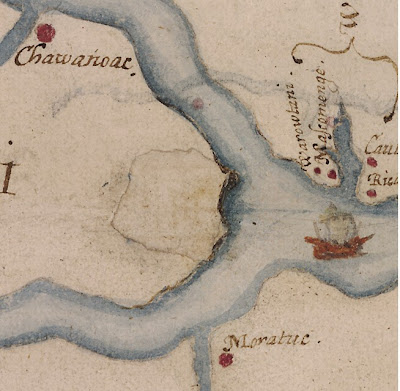 The other patch, this one, serves no obvious purpose. It located at the confluence of the Chowan and Roanoke Rivers, about 50 miles inland. 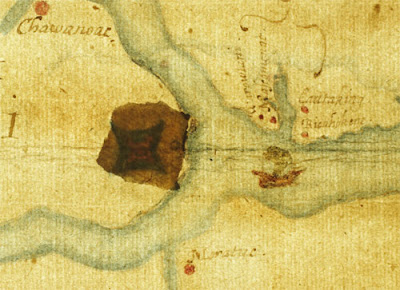 Curators at the British museum finally thought to check on this unexplained oddity by shining a light through the map. Presto! Underneath the patch is a hidden symbol for a fort.

This is a very cool discovery, and it opens up all sorts of intriguing possibilities. But it in no way justifies the pronouncements coming from the scholars involved here. For example,


"We believe that this evidence provides conclusive proof that they [the lost colonists] moved westward up the Albemarle Sound to the confluence of the Chowan and Roanoke rivers," said James Horn.

No, it does not. John White, who drew the map, never found the missing colonists. Or at least that is what he said, and from what we know of the expedition he had no opportunity to sail up the Roanoke River on his own. He might have drawn the fort on the map as a guess, or in response to a rumor, or because he misunderstood something someone else had told him. White wrote in his account of the expedition that he believed the colonists had gone south, not west, and moved in with the Croatoan Indians. If he knew they had actually gone west, why would he have lied about it? Perhaps to protect them, I suppose, but, again, we don't have any indication that he learned anything that everyone else on the expedition did not also learn.

Archaeologists will, I assume, start exploring the area of the fort symbol for a 16th-century colony. Even if it existed, though, such a brief settlement of fewer than a hundred people without much in the way of supplies might leave few conclusive traces for us to find. The good news is that the area is still largely rural, so at least there is some chance of finding a trace of any fort that was ever actually there.
Posted by John at 1:02 PM