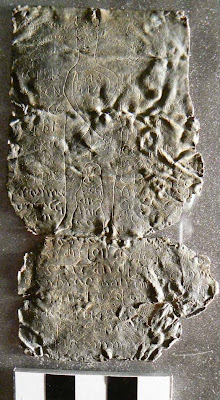 The Museo Archeologico Civico di Bologna, in Italy, has announced that two lead curse tablets have been rediscovered in their collection and translated. The tablets have been lying around the museum basement, ignored, since the nineteenth century. (Wonder what else is lost down there?) The two tablets probably date to the 4th Century CE. One targets a Roman Senator named Fistus (Crush, kill Fistus the senator. . . . May Fistus dilute, languish, sink and may all his limbs dissolve. . . .), the other a veterinarian named Porcello. (Destroy, crush, kill, strangle Porcello and wife Maurilla. Their soul, heart, buttocks, liver. . . ) 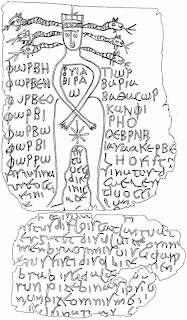 Detail and drawing of the Fistus curse. The figure with snakes for hair may be the goddess Hecate, who was, among other things, the goddess of witches and black magic. 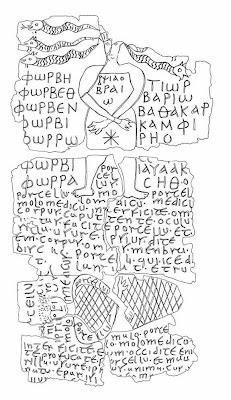 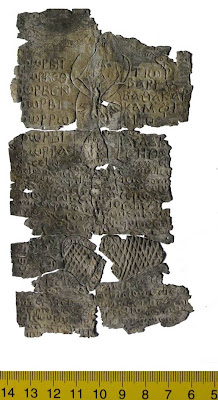 The curse against Porcello.

I wonder if placing these tablets in the ground helped people get past their anger, or just made them more miserable when the curses didn't take immediate effect.
Posted by John at 8:27 PM