Climate Change and the End of Indus Civilization 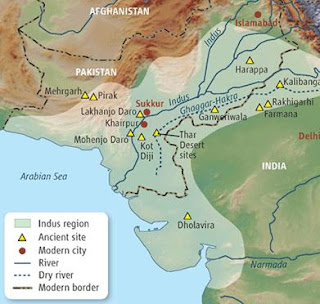 Some time around 1900 BC, the great civilization of the Indus Valley went into decline. Many settlements were abandoned, including many villages and some of the major cities. The remaining cities shrank, and their grand buildings were carved up into small apartments or used as trash dumps. The famous sewers were no longer cleaned out. After limping along for two hundred years, what was left of the civilization disappeared. The cities were abandoned, the written script forgotten, the whole civilization forgotten for 3600 years. Some survivors seem to have moved east, into the Ganges Valley, but this is disputed.

Why? From the time the ancient cities of the Indus were first rediscovered, in the 1860s, there have been two main theories: invasion and climate change. Some European scholars first thought that the demise of the Indus civilization represented the entry into northern India of the speakers of Indo-European languages, who were nomadic cattle herders and so simply sacked the cities and left them to die. The problem with this explanation is that none of the cities shows evidence of destruction, and none of them seem to have been taken over by people of another culture, not to mention that some places have been invaded and conquered by nomads a dozen times without their civilizations ever disappearing. 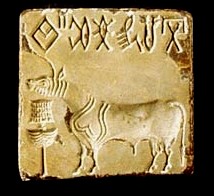 Climate change has also had proponents from the beginning. Some of the Indus cities are now in deserts, next to the courses of dried-up rivers (see map above).  A cursory survey of Pakistan's many such dry rivers and marshes shows that the place was once much rainier than now. But when? The authors of a new study of sediments at the mouth of the Indus say that the timing is right, and the rivers experienced a major decline in flow right around 1900 BC. This happened, they say, because the pattern of the monsoon changed, so that less rain fell, and what did fall was shifted south and east:


Initially, the monsoon-drenched rivers the researchers identified were prone to devastating floods. Over time, monsoons weakened, enabling agriculture and civilization to flourish along flood-fed riverbanks for nearly 2,000 years. . . . Eventually, these monsoon-based rivers held too little water and dried, making them unfavorable for civilization. "The Harappans were an enterprising people taking advantage of a window of opportunity — a kind of "Goldilocks civilization," Giosan said.

Eventually, over the course of centuries, Harappans apparently fled along an escape route to the east toward the Ganges basin, where monsoon rains remained reliable. "We can envision that this eastern shift involved a change to more localized forms of economy — smaller communities supported by local rain-fed farming and dwindling streams," Fuller said. "This may have produced smaller surpluses, and would not have supported large cities, but would have been reliable."

This change would have spelled disaster for the cities of the Indus, which were built on the large surpluses seen during the earlier, wetter era. The dispersal of the population to the east would have meant there was no longer a concentrated workforce to support urbanism.

Well, maybe. As I said, people have been trying to explain the demise of the Indus ("Harappan") civilization by climate change for 150 years, and there is nothing like a consensus about when the climate dried and what the impact would have been. MacArthur winner Rita Wright's unreadable but fact-filled book cites studies that date the drying to 4000 BCE, 500 BCE, and every century in between. Plus, you know, sometimes civilizations adapt to climate change very well. Even if less rain fell in Pakistan after 1900 BC, the Indus never dried up, and (according to Wright, anyway) the amount of water flow was always enough to have maintained urban civilization if anyone had been organized enough to set up proper irrigation systems. This is the problem with all arguments that tie the fate of civilizations to climate change. Climate change by itself explains little, unless you can also explain why the civilization in question was not capable of adapting to the change.

I have three thoughts on the subject. Perhaps the economic foundation of Indus Civilization was never actually very strong, and the cities always struggled to extract enough food from the countryside to sustain themselves; thus, only a small push was enough to make the whole structure collapse. Or, perhaps there was an invasion or infiltration of Indo-European peoples at around the same time, destabilizing the political situation such that the power of the engineers who built the Indus cities was already weakened when the skies began to dry. This might have been accompanied by a pull effect as well. If some Indus people had set up settlements in the Ganges plain, and those settlements were thriving and welcoming more immigrants from the homeland around the time the rains failed, it might have seemed easier to decamp to greener fields than to stay around dealing with drought and barbarians.

The climate matters a lot, but people with technological skills have made civilization thrive in all sorts of environments, including places much drier than Iron Age Pakistan.
Posted by John at 10:16 AM