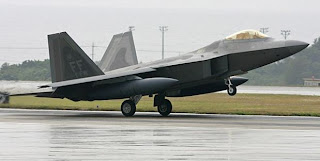 The F-22, the most expensive, most sophisticated fighter plane every built, has a problem with the oxygen supply to the pilot. The Air Force has been unable to correct the problem, and now some pilots have refused to fly their $300 million machines.

Defense Secretary Leon Panetta is obviously pissed off about the Air Force's handling of the issue, so angry that he just demanded that the Air Force consult with experts from the Navy. Oh, the shame.
Posted by John at 12:12 PM