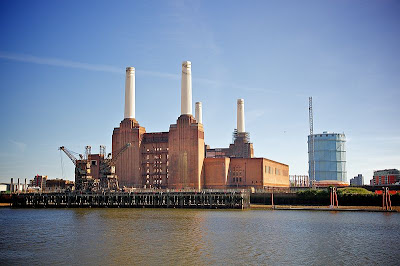 In South London, just across the Thames from fashionable Chelsea, is a vacant 40-acre (16-hectare) property that has been the focus of many development plans over the past few decades: theme park, stadium, 3,400 luxury apartments. But one developer after another has gone bankrupt or walked away, and the site is still unused. Right now it is for sale again, with an asking price of £500 million. There are several issues with the property, which lacks good access to the Underground and is contaminated from a century of industrial use. But the biggest problem is the presence, in the center of the site, of the Battersea Power Station. 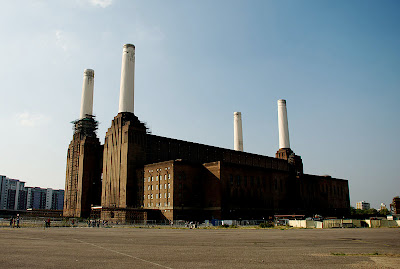 The station was built in two phases, the first in 1929-1935, and the second 1953-1955. The Times states incorrectly that the station "was built in 1933 by Giles Gilbert Scott, who also designed London’s red telephone boxes." Actually it was designed by a team of power company engineers led by S. Leonard Pearce, and Scott was only brought in late in the process to help with exterior detailing, which I mention because I think the we generally give too much credit to architects and not enough to engineers when we talk about buildings. Once completed it was the biggest brick building in Europe.

The station was once an icon of British industrial power, and then it became an icon of industrial decline. Pink Floyd put it on the cover of their 1977 album Animals, and it has appeared in numerous movies, from Hitchcock's Sabotage (1936) to Batman: Dark Knight. It shows up regularly in Doctor Who. Given its history and prominence in popular culture, it has been declared a historic monument that must be preserved in any redevelopment plan. 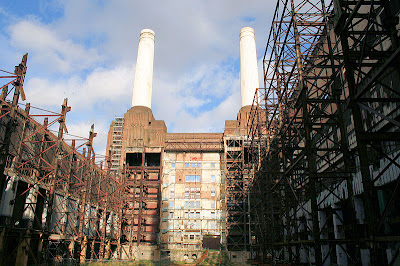 Preserving the station is going to be expensive because it needs a lot of work. The people who were going to turn it into a theme park got as far as removing the roof before they gave up, so it has been roofless for a decade, with attendant decay. There are doubts about the stability of the stacks, so something may have to be done about them. 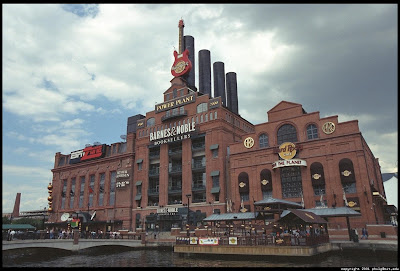 This issue reminded me of the Power Plant in Baltimore, right next to the Inner Harbor. Back when this was being redeveloped, in the 1990s, I thought it was folly to try to preserve it and the city was making a big mistake by not allowing its demolition. But the Cordish Companies turned it into a retail, dining, and office complex and this has been quite successful, a real addition to the city. Since London is fundamentally a much richer and more vibrant city than Baltimore, something similar ought to be possible at Battersea. I am always ambivalent about the preservation of old, urban buildings, because I hate to see valuable urban properties going to waste because of preservation rules. One reason more and more rural land is always getting gobbled up for new buildings is that we put so many obstacles in the way of new building within cities. But surely somebody can find a great way to use the Battersea station.
Posted by John at 8:35 AM