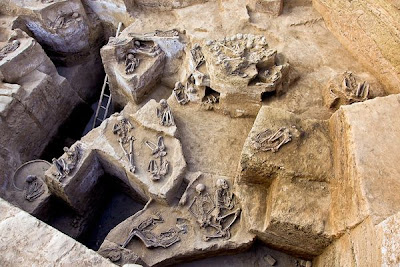 At the foot of a pyramid along Peru's northern coast, archaeologists have unearthed a pit filled with about 100 human skeletons and the remains of a huge, beer-soaked feast. The pyramid is in the Sicán site, the capital of the Lambayeque people, who ruled the region from about A.D. 900 to 1100. The skeletons were buried naked, some of them headless, and were almost certainly human sacrifices.
Most of the victims are adult men, and when archaeologists find a mass execution of men they usually assume they are looking at war captives. There is not much evidence, though, that the Lambayeque people were warriors. Their sites are undefended, their art does not feature warfare, and weapons are not prominent in their tombs. This has led to some strange speculations about where these victims came from, like this one from Haagen Klaus of the University of Utah:

All the dead in the newfound pit were likely willing participants from local communities engaged in a ritual that celebrated death so that "new life could emerge in the world," Klaus said in an email to National Geographic News.

I think it is more likely that there was some warfare in the Sicán world, however little their culture emphasized it, and that these men were the victims of it. Since the site is in many ways unique (so far) it is very hard to know.
Posted by John at 8:28 AM

Haagen Klaus actually calls Utah Valley University home (and it deserves all the recognition it can get). :D He is a wonderful instructor and a fantastic fellow--I'm a journalist that had the chance to interview him in depth a few years back, and he's a truly brilliant man that is passionate about what he does. It's amazing.