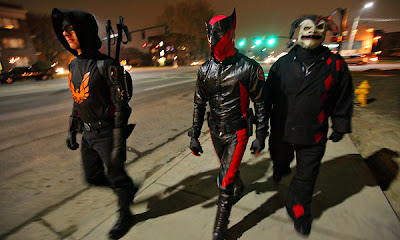 All across America, real people are putting on superhero costumes to fight crime and make their cities safer. Kirk Johnson called them "somewhere between comic-book fantasy and the Boy Scout oath." Some of these guys are not mild-mannered nerds, but bruisers with rough pasts:

Red Voltage, who in mild-mannered daytime life is a 23-year-old residential leasing manager named Roman Daniels, casually waved a gloved hand to his female drive-by fan. Clad head to toe in a red-and-black leather suit, his face covered by spandex, he is, he said, a different man when the mask goes on — a better man.

“But there are times when I’m putting the suit on, and I’m just like, ‘How crazy am I to do this?’ I do feel odd and out of the box,” said Mr. Daniels, who took over leadership of the group here, called the Black Monday Society, about six months ago, after two years of patrols. . . .

Mike Gailey, a burly former bouncer at a strip club whose crime-fighting persona is called Asylum, said that for him, joining the Black Monday Society was partly about making amends for things in his past, like the time he spent collecting debts for drug dealers.

Another Black Monday patroller described himself as a former gang member.

My reaction to this is that, well, people have a lot of energy that they put into all sorts of peculiar activities, and if these guys want to patrol the streets in costume, why not? They could be doing much worse things, and since just having more people on the street deters a lot of muggings and rapes, they may be doing some good. 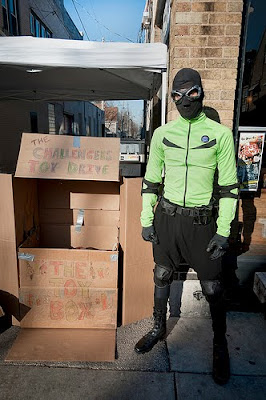 Above, a RLSH (real-life-superhero) who calls himself Night Vision, part of a Milwaukee group called the Challengers, which held a Christmas charity drive this year. 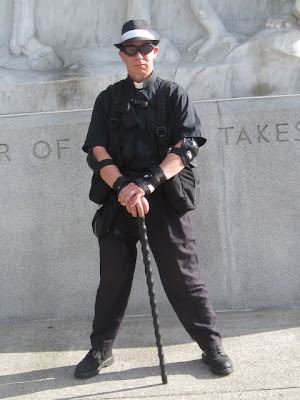 The Reverend, of Salem, Oregon. Quote: 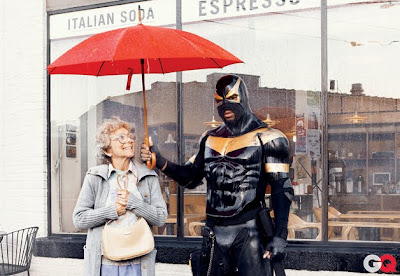 Phoenix Jones, of Seattle, who was in the news a while back after he intervened in a brawl and got arrested by the police. That armor, he says, turned a knife a while back when a gang-banger tried to stab him. More here. 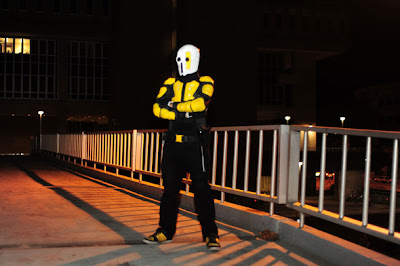 I’ve been called everything from Jason to Freddy to Scorpion to vigilante to freaking psycho. The list goes on. It doesn’t matter, though. The funniest thing about wearing the mask is they can’t see your face. And they can’t see you smiling at them, either.