More on that Viking Age Cemetery in Poland

National Geographic has a feature on the Viking Age cemetery at Bodzia, Poland, which I wrote about here. They have some additional pictures. These bronze belt fittings connect the aristocratic warrior buried in the cemetery with a famous ruler of Kiev:

Incised in the metal is a two-pronged emblem topped by a cross. This insignia, Buko said, shows the wearer was a close ally or even a kinsman of a ruler whose deeds are reflected in his nickname: Sviatopolk the Accursed.

Sviatopolk was a member of the dynasty that founded and ruled Kyivan Rus, the first true eastern Slavic state, which lay east of Poland and lasted from the 800s until collapsing four centuries later.

Sviatopolk briefly held the throne in the early 11th century. He earned his nickname by supposedly having his own brothers murdered, to consolidate his power. He was married to a Polish princess and received aid from his father-in-law, the Polish king Boreslav the Brave. 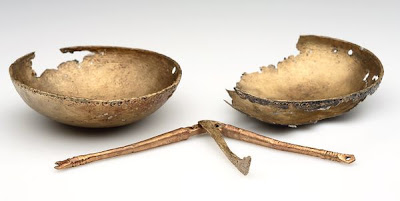 This bronze balance represents the role of the Vikings as traders as well as raiders.
Posted by John at 6:17 PM