The Rebirth of the Anacostia Waterfront 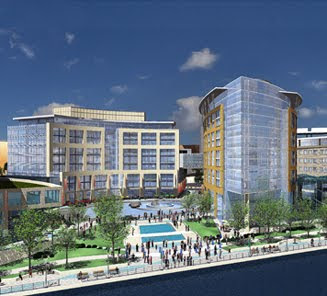 Southeast Washington, DC, was once an industrial zone centered on the U.S. Navy Yard, for a time the world's biggest ordnance factory. Then for decades it was a post-industrial wasteland, fronting on the stinking embarrassment that was the Anacostia River.

But now this neighborhood is coming back. The river is clean enough that people want to be near it. The Navy has converted several old factory buildings into offices for thousands of civilian personnel. Other old factories have been demolished, and several major developments are underway. The banks of the river are becoming parks. 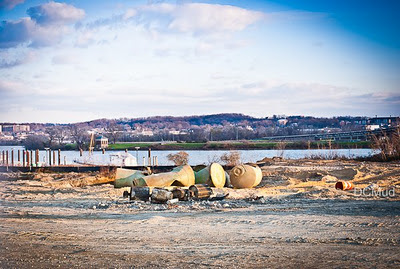 Just this month work has begun on two big projects. The biggest is Riverfront on the Anacostia, a name that twenty years ago would have seemed like a sewage joke but will soon comprise 1.1 million square feet of residential, office, retail and public access to the riverfront (top). The demolition of the concrete plant that now occupies the site is underway (above). 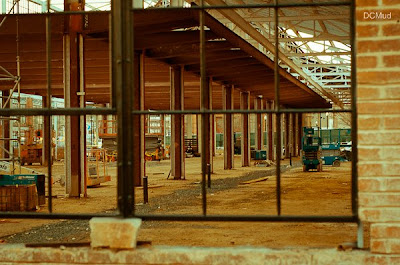 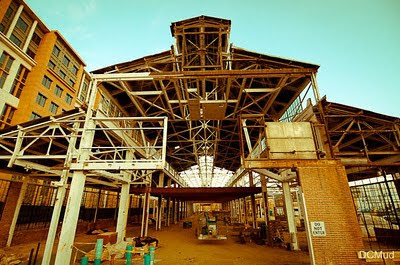 Meanwhile, one of the old navy buildings is being turned into The Boilermaker Shops, a new "festival marketplace."

Oh, and which state grew fastest over the past year? The District of Columbia, which added 16,000 new residents, growing at a 2.7% pace.
Posted by John at 1:56 PM

I was on the riverfront several years ago working on a story about Nationals Stadium. This was in January the year it opened and it was far from complete, though they did open the season on time. I remember hearing about the grand plans for that stretch along the river and I wondered how long it might take to see it come to pass. Your post is gratifying to read.

Though I don't live there, I love DC and hope that area makes a full comeback in every sense of the word. I would love to see a real neighborhood spring up around the Navy Yard and stadium, though I'm sure, unless legislated otherwise, the rents will be prohibitive for any but the wealthiest tenants.

One thing they 'should' do is to have a certain number of units set aside, in terms of price, for people who actually work in the area--especially police, firefighters, educators, etc. Do you know anything about that?